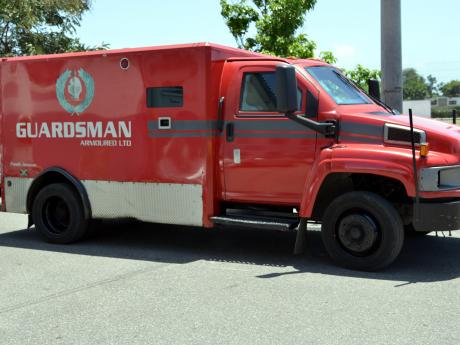 Three Guardsman security guards were ambushed by gunmen as they made a drop-off at a financial institution in Santa Cruz, St Elizabeth on March 3, 2021 - File photo.

A reward of $2.5 million is being offered by the Guardsman Group for information leading to the arrest and charge of the persons responsible for the attack on the company’s security guards in a foiled robbery in St Elizabeth.

The reward is being offered through Crime Stop and expires on April 30.

Three Guardsman security guards were ambushed by gunmen as they made a drop-off at a financial institution in Santa Cruz on March 3.

READ: In aftermath of attack, Guardsman to give all couriers bulletproof vests, making them mandatory

It was reported that shortly after pulling up, gunmen pounced upon the guards.

A shootout ensued and the security guards were shot.

So too were their attackers, who later fled the scene.

The injured guards were assisted to hospital where one, 50-year-old Anthony Embden, succumbed to his injuries.

The two other guards were treated and released.

Do you have any information?