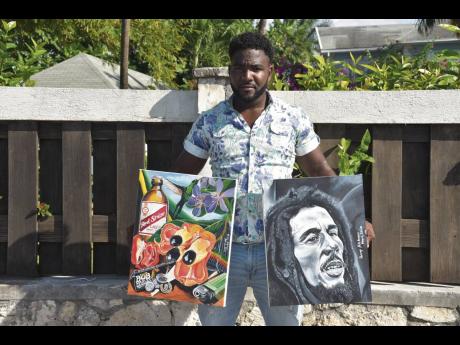 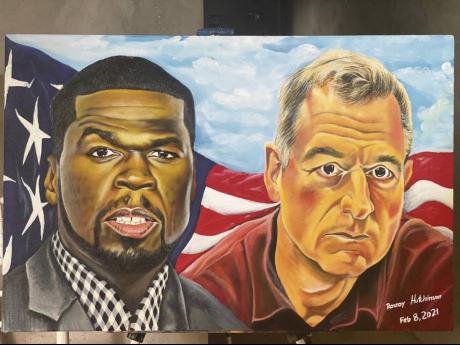 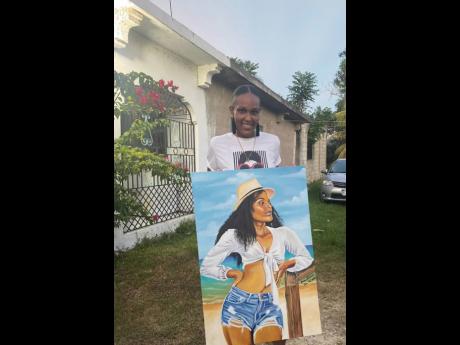 Contributed
One of the pieces done by Roxroy Hutchinson.
1
2
3

From as long as he can remember, Roxroy Hutchinson has always been working with his hands.

Whether it was scraps from the metal workshop near his home in Orange Bay, Hanover, or a piece of wood from the lush greenery throughout his village, or painting and drawing images, this Green Island High School graduate was almost always creating something.

“I have no formal training. It’s just something I taught myself based on my curiosity to learn. It’s a given talent from the Man above,” the talented 27-year-old visual artist said in a recent interview with The Gleaner. “I grew up in a family where we had to make ourselves comfortable.”

“My older brothers were good at creating things from wood and metal, so in my younger years, I would use the scraps from their work to build something, whether it is engravement on wood or go-carts from left-over metal,” Hutchinson recalls. “Then it was painting and drawing images, and the more I practised is the more my skills advanced.”

Despite his love for the arts, Hutchinson did not see this as a viable career choice following high school but began working as a fitness instructor to make an income, but a chance meeting with then general manager at Beaches Negril, Adrian Whitehead, would change his life.

“I don’t really think Jamaicans on a whole understand the true value of art and how to appreciate it,” he said. “Some people would rather go to a store and take a print than pay the money for an original painting, so I really did not think there was any hope for me to earn from my paintings. It was a real hassle.”

“The opportunity to begin earning from my natural skills came in 2012 when my brother introduced me to Adrian Whitehead, the general manager at Beaches Negril at the time,” recalls Hutchinson. “He had a painting job that required some artistic skills, and I executed the job in 48 hours, and he was impressed with my efficiency. The word went out, and I started to get jobs from the hotels.

From adults only to family-oriented, from all inclusive to European style, Hutchinson soon became a staple across the wealth of hotel properties in western Jamaica, doing mainly props works, stages, and murals. “Not being tied to one hotel helps to get the food on the table, especially during this pandemic because if one hotel does not want art work, another will.”

Yet, the reduced activities in the tourism sector, due to COVID, saw Hutchinson becoming more aggressive in marketing his talent, and he is now reaping benefits. “Twenty-twenty was not a good year, but I ended the year on a good note with a job from one of our hotels,” he said “It’s not as frequent as I would like, but we must be grateful.”

“When the hotel closed down, I formulated a plan to look at how I am going to survive because my bills have to be paid, so I had to come up with a strategic plan.”

Hutchinson caters for both local and international clientèles, with his client-base growing significantly over the past few months, especially for portraits.

“My international clients outnumber my local-based supporters, but I also see a growing interest from our locals, and that is encouraging, but if the prospective client is overseas, all I will need is a clear enough picture, and then on completion, I will send off by FedEx or a preferred source.”

While his work continues to attract interest from all spheres of society, he is grateful for the support both locally and from abroad. “I got a lot of encouragement from hotel workers, our elders, and clients, but I am inspired by life itself, so when I paint, I am trying to think like the person viewing the piece of art rather than the one painting. Sometimes you have to be your own credit.”

Hutchinson is confident that Jamaica’s tourism will be on full throttle by 2022, and properties will once again be abuzz with activity.