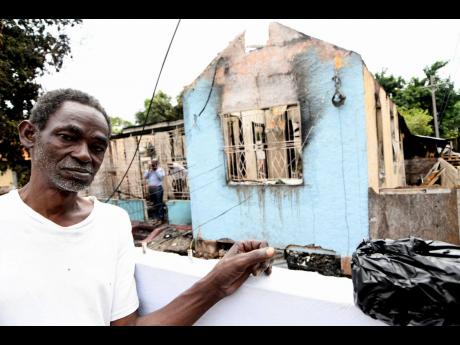 Rudolph Brown/Photographer
Cedrick Robinson looks on against the backdrop of his gutted house on Mid Avenue in Allman Town, Kingston, on Tuesday. 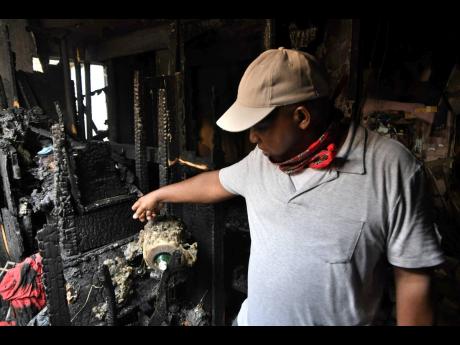 Rudolph Brown/Photographer
Simeon Allen, a cabinetmaker, shows his handiwork ruined by fire. A house and an adjoining woodwork shop were destroyed in the blaze on Tuesday. 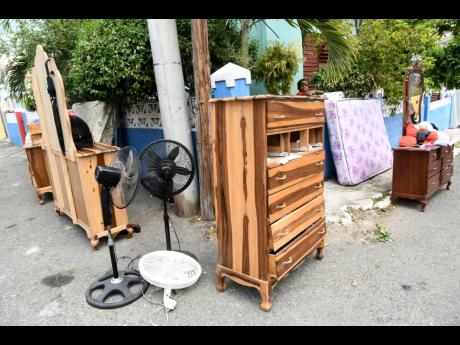 Rudolph Brown/Photographer
A boy looks out from inside a yard at furniture and appliances saved from destruction after a fire gutted a dwelling and woodwork shop in Allman Town, Kingston, on Tuesday.
1
2
3

For the second morning in as many days, Kingston residents awoke to screams of “Fire!” Again, they were left to salvage a few items of value amid the rubble.

Eight members of a dwelling located at 12 East Lane in Allman Town fell victim to a fate similar to that of the 30 residents who lost everything during the deadly Beeston Street fire on Monday.

One woman, Latoya Whyte, lost her life during that incident, which transpired about 3 a.m.

In Allman Town, Garland Dennis said that he emerged from a slumber to a telephone call and barking dogs some time after 2 a.m. on Tuesday.

When he got up and peeped through a window, his eyes widened in shock as fire engulfed the back of the house.

He immediately alerted another resident, Cedrick Robinson. Together, they tried in vain to extinguish the fire.

He only managed to save a fan, dresser, and chest of drawers.

The cause of the fire has not been established.

For the time being, the residents are concerned about finding shelter.

Jamaica Labour Party councillor/caretaker for the Allman Town division, Ray Wynter, was on hand on Tuesday and said that he was in discussions with Member of Parliament Donovan Williams to find accommodation.

“We are trying to see if we can relocate them temporarily until we get something set up for them. They all want to come back here, so we need to go through the system to see what sort of help we can give to them to get back some dwelling there,” Wynter said.

Another resident, Terry-Ann Williams, has lived at the location for nine months.

She was concerned about where her family would rest in the aftermath of the blaze.

“We end up round deh a help out with the fire, but when we see the place a catch, we come roun’. I only saved a few things: a little bag with my passport and other documents,” Williams said.

A woodwork shop adjoining the dwelling was not spared.

Proprietor Ewan Roberts said that he was not daunted by the tragedy.

Damage to his premises was estimated at $1 million.

“I would like [to] get back what I can and do what I am doing, and move on,” Roberts said.