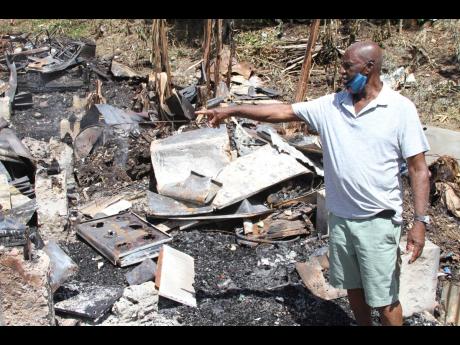 Nathaniel Stewart/Photographer
Easton Sharpe, 73 years old, of Commissary district, Frankfield, points to a burnt-out stove from his restaurant which he had been operating for 18 years.

The building, which housed a hair salon, mechanic shop, cookshop, and was used as a storage facility for a farmer in the community, was located metres away from the Frankfield Fire Station and was burnt to the ground.

Charmaine Brown, wife of Coral, who lost eight bags of oranges, bananas, five tarpaulins, plantains – over $100,000 worth of goods he has not yet paid for – said he has taken the blow really hard.

“Right now, a rum him a tek fi it, because him still affi go find money pay the farmers him tek the goods from,” Brown shared with The Gleaner last Saturday.

The goods were taken on consignment, with the understanding that it would have been sold and then the farmers compensated them after.

Brown acknowledging that although it is not her husband’s fault, there is little hope that the creditors will take that into consideration.

“Bwoy, a COVID time now, so everybody a bawl,” she said, even as she hopes that her husband will get some assistance to deal with the loss he suffered.

Other neighbours who milled around observing the remains of the building, expressed disgust that the station could have been so close and yet nothing could be salvaged.

District Officer for the station, Glenville Blake, told The Gleaner they were alerted to the fire by a member of staff who went to the bathroom sometime after 2 a.m. and noticed the blaze.

“We don’t know what’s the cause yet, presently; it’s just speculation. We don’t have sufficient evidence to even determine the cause; the loss is about $4 million,” he shared.

Blake said he also called in a unit from the Christiana Fire Department to assist in putting out the blaze.

He said had they not responded promptly, other areas would have been damaged. According to Blake, there was nothing they could have done to save the wooden section of the building as it was windy. He is, however, thankful they were able to save the concrete portion of it.