No issues with vax incentive for elderly – Eldemire-Shearer 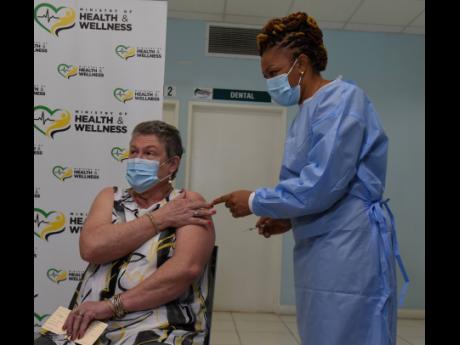 Ian Allen/Photographer
Dr Denise Eldemire-Shearer, professor of public health and ageing at The University of the West Indies, affixes a Band-Aid to her arm after receiving the COVID-19 vaccine from Fiona Ellis, public-health nurse, at the Good Samaritan Inn on Wednesday. Eldermire-Shearer was the second person to receive the government-issued jab in the island.

CHAIRPERSON OF the National Council for Senior Citizens, Dr Denise Eldemire-Shearer, has said she has no problem with the Government’s elderly incentive programme that is linked to the COVID-19 vaccination exercise.

On Wednesday, Minister of Finance and the Public Service Dr Nigel Clarke announced that persons age 60 and over who have been vaccinated could benefit under the administration’s SERVE Jamaica Programme.

Under the Conditional Cash Transfer for the Vaccinated (CCTV) subprogramme, persons 60 years and over who are not employed or receiving a pension greater than $1.5 million per annum are eligible for the benefit.

Eldemire-Shearer said that the CCTV was similar to the Programme of Advancement Through Health and Education (PATH), noting that getting a government benefit, in some instances, was tied to healthcare.

Eldemire-Shearer, who was among the first Jamaicans to receive the vaccine on Wednesday, said she felt great. “I got it at about 8:15 a.m. and I am fine,” she told The Gleaner about four hours after the jab was administered.

“It’s now one year since the stay-at-home order, and it is now time for us to get back to a normal, safe life. The vaccine is one cog in the wheel and I think it’s critical. I think today (Wednesday) is a good day for Jamaica.”

Jean Lowrie-Chin, founder of the Caribbean Community of Retired Persons, said that the proposed payment of $10,000 to persons 60 years and older, which is pegged to the vaccination programme, was not the only benefit announced by Dr Clarke in his Budget Debate presentation for senior citizens.

“I can understand why he would want to offer an incentive to the elderly to get the vaccine,” she told The Gleaner.

She emphasised that senior citizens were the most vulnerable in the population.

Lowrie-Chin noted that the vaccination of the elderly would also help to protect the health system, which has come under increased strain since a massive spike in cases in February.