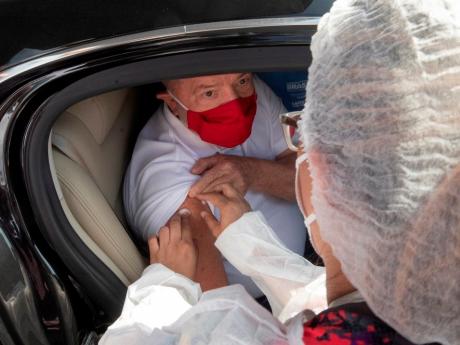 In this photo by The Associated Press, a health worker gives a shot of the Sinovac COVID-19 vaccine to former Brazilian President Luiz Inacio Lula da Silva at a drive-thru site in Sao Bernardo do Campo, Sao Paulo state, Brazil yesterday. Brazil now has the second highest number of COVID-19 infections behind the US, with more than 11 million people having been infected by the virus (AP photo).

Health systems in most of Brazil's largest cities are close to collapsing because of the high number of COVID-19 cases, the BBC quoted the country's leading health institute, Fiocruz, last week. More than 80 per cent of intensive care unit beds are occupied in the capitals of 25 of the country's 27 states.

The country's president, Jair Bolsonaro, also continues to be blamed for downplaying the threat of the disease.