‘8th wonder of the world’ 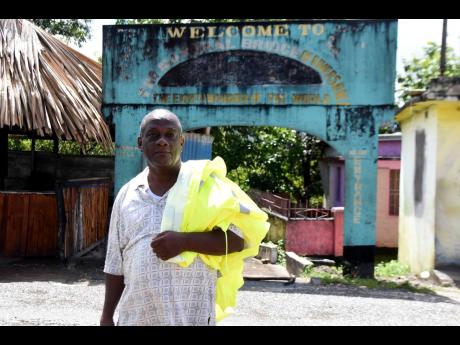 Kenyon Hemans/Photographer
Noel Bennett, president of the community development committee in St Catherine, stands at the entrance to a walkway that takes visitors to the bottom of a natural bridge in Riversdale. He hopes to resurrect the stillborn dream of the bridge as an ecotourism attraction. 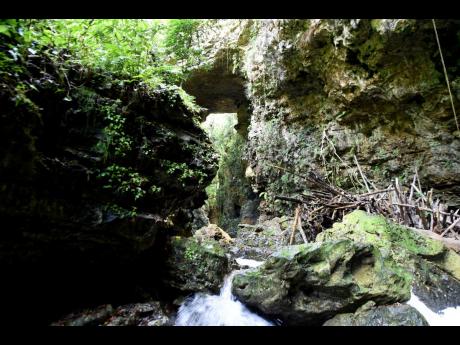 Kenyon Hemans/Photographer
The rock formations below the Riversdale bridge are a sight to behold, say community stakeholders. 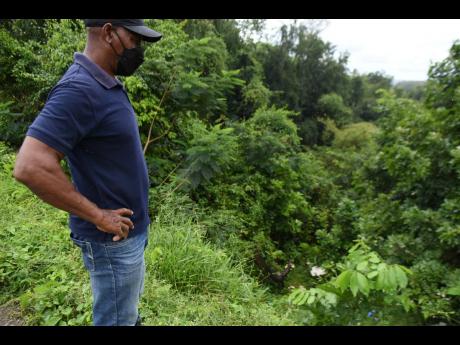 Kenyon Hemans
Michael Pottinger, vice-president of the St Catherine CDC, surveys overgrowth that has blanketed the bottom of the Riversdale natural bridge. 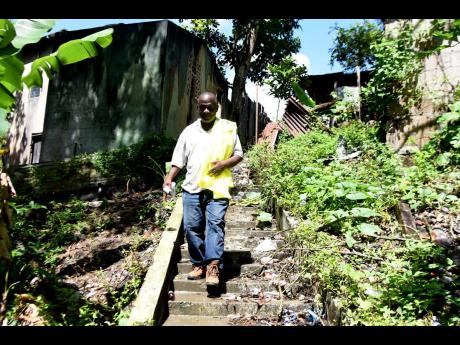 Kenyon Hemans/Photographer
Noel Bennett, president of the St Catherine CDC, takes the long descent to the base of the Riversdale bridge.
1
2
3
4

The Riversdale Natural Bridge, considered by community stakeholders to be ‘an eighth wonder’ of geological significance, has been pitched as a potential economic game-changer for the farming-dependent rural district.

Situated at the square, the naturally formed bridge is the product of a river that pierced the limestone rock some 400 feet below, carving out an opening that allows water to flow while creating drivable access above.

It was earmarked for major development in 1989 by then Member of Parliament Anthony Johnson, but those grand plans are yet to be fulfilled.

A small reception area was established with what seemed like a never-ending line of steps descending some 200 metres below to a cave-like enclosure on the riverbank, providing a mesmeric view of the rock formation and the bridge above.

However, the burgeoning ecotourism site has fallen into disrepair.

The Riversdale Community Development Committee (CDC) said it is pushing ahead with a project proposal to redevelop the bridge and enhance the scenery in an effort to promote community tourism. The committee is soliciting private- and public-sector input.

“We see the tremendous possibilities that can be derived from this venture. Nowhere else in Jamaica is there a naturally formed bridge, with the kind of rock formation that this bridge has. It is a perfect attraction, and it is our intention to revitalise it and have it as a main attraction in our plans to promote community tourism, linking it to farm tours,” Noel Bennett, president of the Riversdale CDC, told The Gleaner.

The CDC is exploring forging profit-sharing partnerships with private landowners in the proximity of the site. Those initial steps will also see engagement of the state-owned Tourism Product Development Company, as well as other interests in the diaspora.

The CDC president said that the development will also facilitate educational tours for research students of geography who will get an opportunity to observe stalactites, stalagmites and other geological formations.

“This project is expected to provide employment opportunities for many persons during the developmental stage, and after, with a number of young people obtaining permanent employment as tour guides,” Bennett said.

Ava Marie Johnson, a local businesswoman, believes that the project will offer an economic lifeline to the community.

“This can be a viable tourist attraction, bringing direct employment as well as opening up job opportunities for youths in the district,” Johnson said.

She stated that no emphasis had been placed on the venture in the past. Now, she said, was the time to correct history’s mistakes.

Michael Pottinger said that the ambitious project must lock in the interest of disenchanted youth.

“We have to find creative ways to get the young people who stand to benefit more to be fully engaged,” he said, pointing out that the initiative could transform the economy of Riversdale.

Pottinger said that one of the first tasks will be to erect guardrails alongside the bridge, which connects Riverdale with Williamsfield, Freedom, and adjoining communities.

Citing an accident involving a motorist who was killed instantly when the vehicle he was driving plunged over the bridge, Pottinger said that the lack of guardrails presented danger to motorists and others.