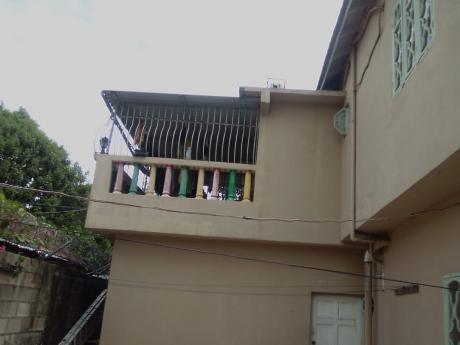 According to neighbours, Richards, who died after she was stabbed multiple times in the upper body, had indicated to her partner of three years that she was no longer interested in the relationship - Ruddy Mathison photo.

The police say a search is ongoing for the boyfriend of 37-year old Tamika Richards in connection with yesterday’s fatal domestic dispute in Spanish Town, St Catherine.

An appeal has been made for 27-year-old Rhiyeme Woodhouse, otherwise called ‘Pops’, of Mother Smith Lane, Spanish Town in the parish, to turn himself in to the Spanish Town Police by 6:00 p.m. today.

He has been listed as a person of interest by the police in the investigation.

According to neighbours, Richards, who died after she was stabbed multiple times in the upper body, had indicated to her partner of three years that she was no longer interested in the relationship.

Concerned friends visited her home, which she shared with her two sons, on Sunday about 6:30 a.m. after failing to get in contact with her.

They reported that they forced open her bedroom door to find her lying on her bed in a pool of blood with multiple stab wounds.

She was taken to the Spanish Town Hospital where she was pronounced dead.

Two neighbours told The Gleaner that Richards and Woodhouse had been having a lot of problems in their relationship.

"A whole heap of fights, dem fight regular. This minute dem sour and the next minute them sweet," revealed Sharon Byfield, a visually-impaired neighbour who lives on the ground floor of the two-storey building where Richards and her two sons occupy the upper floor.

"She wanted him fi leave and him nah leave. She told him three weeks ago that she done because she can't bother with the whole heap a fuss and fight. Him all pop off her chain off her neck and crab her neck," she told The Gleaner.

Byfield said Richards, who is the mother of her cousin's child, is a quiet, nice person who loved to cook.

Byfield’s husband, Delroy, also spoke about the rocky relationship between the couple.

"Dem fuss all the time. Him never live there, him come and go. When him come at night him bang on the door hard," he stated.

Friends and neighbours who gathered at the deceased woman's house on Sunday grieved openly and stressed that she did not deserve such a gruesome death.

The police are appealing to anyone with information that can assist them in their investigations to contact the Spanish Town Police at 876-984-2305 or 876-984-2874, Police 119 emergency number or the nearest police station.