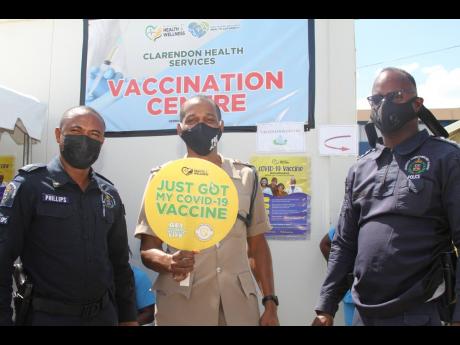 Nathaniel Stewart/Photographer
Senior Superintendent of Police Glenford Miller (centre) is flanked by Superintendent Christopher Phillips (left) and Deputy Superintendent Anton-Gur Cardoza after getting the COVID jab yesterday at the May Pen Hospital in Clarendon.

On Tuesday, Clarendon’s top-ranking police led the way in taking their COVID-19 vaccine at the May Pen Hospital.

Glenford Miller, commanding officer for the parish, said as managers they were setting an example by leading from the front.

Miller, who has about 650 police personnel under his command, said half of that number has already signed up to receive their vaccine, while the other half, he believes, are “watching and waiting”.

He also said that 10 officers are out due to contracting the COVID virus.

“It is a seamless process and currently I am feeling no pain, no signs of anything at all, and I would encourage everyone to come out and take their vaccine,” he told The Gleaner following the completion of his observation.

Miller, who conversed with the rest of his team as they took the vaccine, said none had reported or shown any ill effects after taking the jab.

“The doctors and the workers there, they would have been so gentle and patient with us,” he said.

Christopher Phillips, operations officer for the Clarendon police, had nothing but praise for the team who, he said, made it a seamless process from registering, to counselling, to taking the vaccine and then going for observation.

He also used the opportunity to appeal to the rest of his staff, and others, “to think about the country and what we are facing now. I think we just have to do what we have to do so that we can quickly move back into normality,” he said.

There was a light moment during the whole process when the tough cop could be heard pleading for a “gentle touch”.

His plea elicited a humorous reply from the vaccine administrator, “You better pray I have a gentle finger!”