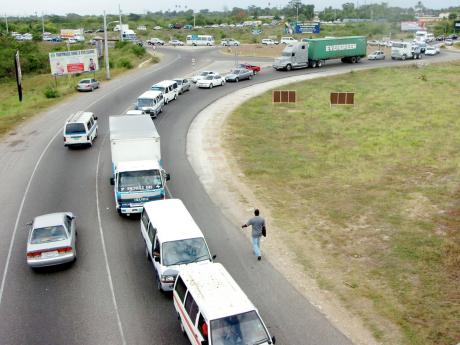 Motorists currently face lengthy delays along the Mandela Highway from Six Miles to Caymanas during afternoon peak hours, and there are also long lines of vehicles trying to exit Portmore via the same route in the mornings - File photo.

The Government is moving to address the traffic congestion being experienced by motorists entering and leaving Portmore via the Mandela Highway.

Motorists currently face lengthy delays along Mandela from Six Miles to Caymanas during afternoon peak hours, and there are also long lines of vehicles trying to exit Portmore via the same route in the mornings.

Minister without Portfolio in the Ministry of Economic Growth and Job Creation with Responsibility for Works, Everald Warmington, told JIS News that at least two options are being considered to address the issue.

He said that one option is the construction of a bridge at the entrance to the toll road at Mandela Highway in the vicinity of the Ackee Village, which will cost some US$20 million.

He indicated that another solution, which would be less costly, would require the approval of the National Road Operating and Constructing Company (NROCC) that oversees the toll operations.

“We would have to go down the toll road and have on and off ramps constructed at the Grange Lane Bridge,” he said.

Warmington said that the Ministry is working to find a solution this year, so that persons entering Portmore via the Mandela Highway can have an easier commute, thereby saving time and money.

He said he does not foresee a loss in revenue for the toll road, which is now fully owned by the Government, as a result of the creation of the on and off ramps.

He argued that the existing users of the highway will continue to do so as they travel beyond the proposed exit, so too those who use the Portmore toll, as they see it as a more convenient route to get to where they are going.

He noted that consideration may need to be given for a fee to use the earlier part of the toll.

“But we have to consider the inconvenience now being caused to thousands of people in Portmore,” he said.

Meanwhile, Managing Director of NROCC, Ivan Anderson, told JIS News that additional access to the highway will be created as the entity looks to facilitate the numerous housing developments that are currently under construction or are slated to come on stream.

“There is a lot of development taking place right now between Kingston and just outside of Spanish Town,” he said.

“Up to 17,000 potential homes are to be built in that area stretching from the edge of Portmore going just past Spanish Town in what is called the Bernard Lodge Development area. Those people have to find a way to get on to the highway, so we’re looking at a number of locations along there,” he noted.

The NROCC managing director said that one area of consideration is Whitewater Meadows where there could potentially be new access on to the highway.

Entrance on to the highway in the vicinity of Grange Lane is also being looked at, in consideration of the traffic in and out of Portmore, he noted.

Anderson said that the Housing Agency of Jamaica is undertaking a development just east of Spanish Town and north of the highway and “we’re looking to see whether we can bring those people on to the highway as well”.

“That area is going to become very dense in terms of housing over the next few years and we’re looking at how we can do our part to ensure that those people have easy access in and out of their homes,” he said.