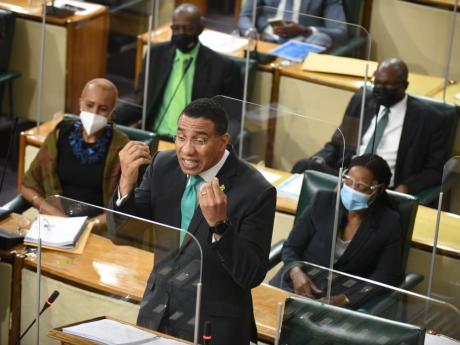 Holness: We are not trying to use the extraordinary measures to abuse the people of Jamaica!

An infuriated Prime Minister Andrew Holness sighed, stared, shook his head then seared the Opposition on Thursday over its resistance to extending the States of Public Emergency (SOE).

According to Holness, it was incredibly frustrating that for political reasons the Opposition "opposed, opposed, opposed" just when the government showed that it could use force without violence.

"We are not trying to use the extraordinary measures to abuse the people of Jamaica!" Holness charged as he made his contribution to the 2021 Budget Debate.

He continued: “Whenever a measure is working, we should unite and say ‘let us support it'.”

However, he said the Government would not be deterred, announcing that two more communities are on the cusp of being declared a Zone of Special Operation.

The Opposition had taken issue with the prolonged detention of people without charge under the SOEs.

The Supreme Court has since ruled that the prolonged detention of five men under the SOEs was unconstitutional.

The government is appealing.

In the meantime, Prime Minister Andrew Holness said his administration will not be deterred.

He said two more communities are be declared Zones of Special Operations.

"We can report that we ended 2020 with fewer murders than the previous year and since 2018 we have essentially flattened the murder curve,” Holness said.