Bucknor family pleads for assistance after house goes up in flames 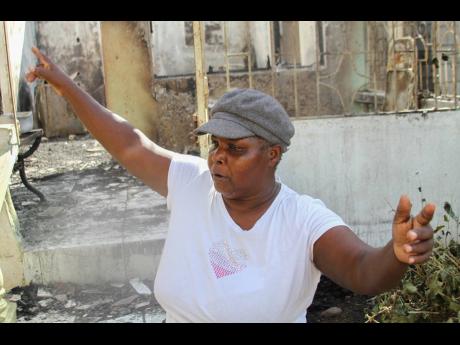 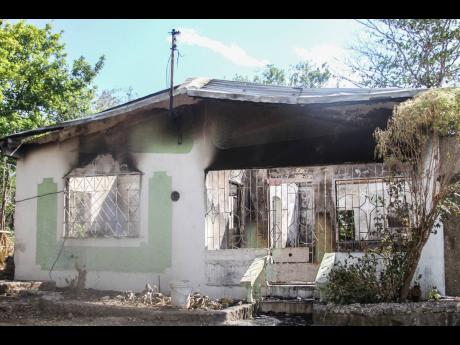 A Bucknor family is now struggling to put the pieces of their lives back together after their Bailey’s Avenue three-bedroom house went up in flames last Saturday about 4 p.m.

Sixty-six-year-old Icilda Sheckles, who suffers from diabetes and hypertension, said she was in the yard “planting up something” while overseeing her two grandchildren, ages seven and five.

The younger one told her he wanted to use the bathroom and she sent him inside. He came out and told her the toilet needed to be flushed, to which she responded for him to go back inside and do it.

“By him to go in now to flush di toilet a smell smoke in the house, so when I smell the smoke in the house now, I run inside. So, when I run inside around my back door, I see the settee in mi bedroom blazing and the bed in the bedroom blazing, so a run outside and grab two buckets a water and start throw it, but when I throw it now, the fire get worse and gone up in the air, and mi send di likkle bwoy fi run out and go call people,” she noted.

However, when others came, it was too late as the house was already engulfed in flames. According to Sheckles, the house might have been saved had the fire department got the right message, noting that the address given was Bushy Park instead of Bailey’s Avenue.

Among the valuables lost in the fire were furniture, appliances, items that were being stored for her church, such as keyboards and other items, as well as four doors and four windows for her pastor and wife who are building a house close to where she lives.

Sheckle’s son Steve, looking at the rubble of what once was his house, appealed for assistance.

“Everything just gone up in rubble, all that I have worked for throughout my life has just gone up in flames. It’s gonna be difficult for me to start again,” he said, sharing that presently they are “kotching” with a neighbour who has given them permission to stay until they get a little covering. “We are grateful for that,” he said.

He estimates their total loss to be about $6 million.

Both Sheckles and her son are asking the member of parliament, the councillor for the division and others to assist them in getting back on their feet.

Pastor Desmond Howitt and his wife, Evangelist Terry Wright-Howitt, whose church, True United Apostolic Faith Ministry, of which Sheckles is a member, have been throwing their support behind the family as they assist in getting her medication, which was also destroyed in the fire.

They suffered a huge setback themselves in the fire, as the church equipment as well as the doors and windows which were supposed to be installed on their house have been decked. They are pleading for assistance for the Whitelys as well as for themselves.

“She is the mother for the community. I believe that she deserves the help … even though I had some things in the house, I felt it more for her than for myself. Even myself just decked my house to put in the doors and the windows and it’s all gone in flames, we have to start back from scratch. I, too, am asking for help,” he shared with The Gleaner.