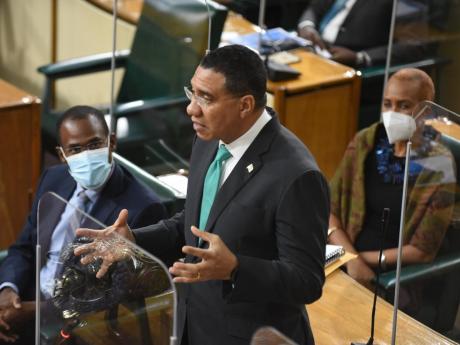 Holness informed that the Jamaica Social Investment Fund is charged with managing the social transformation of these communities and plans are already in place.

The Government will be introducing two additional Zones of Special Operations (ZOSOs) this year, Prime Minister Andrew Holness has indicated.

“We are planning to add an additional two communities, and restructure the operation of one existing ZOSO,” Holness said as he made his presentation in the 2021/22 Budget Debate in the House of Representatives on Thursday.

Holness informed that the Jamaica Social Investment Fund is charged with managing the social transformation of these communities and plans are already in place.

“This means two less communities at war and a lessening of the murder rate,” he said.

Holness noted that the ZOSOs and the short-term version, the State of Public Emergency (SOE), were designed and developed along the lines of classic peace-keeping missions.

He said the objective was to disarm and dominate the space, control movement in and out, keep gang members out, facilitate community life and social intervention, maintain peace and win the trust and respect of residents.

“The residents of the communities that have benefited from either the SOE or the ZOZO will tell you that it brought peace to their community and gave them the assurance of security,” he said, noting that it is an effective tool that has brought peace to communities in a structured way.

A ZOSO is declared under the Law Reform (Zones of Special Operations) Special Security and Community Development Measures Act.

It seeks to contain crime while safeguarding the human rights of residents and promoting community development through social intervention initiatives.

The law gives the Prime Minister power to declare an area a Zone of Special Operations in order to tackle increased crime and volatility in a community.

This is in consultation with the National Security Council.

The zone can only be established after the Police Commissioner and the Chief of Defence Staff make a request for such a declaration in writing to the Prime Minister.