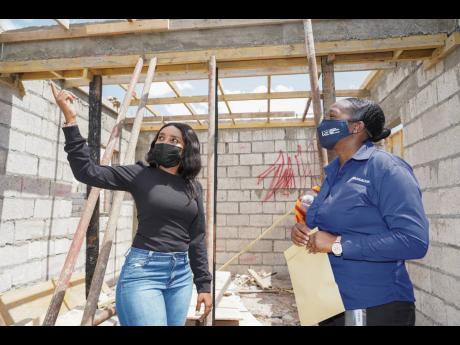 Contributed
Ayana Humber (left), shows Zonya Pryce, project officer, NCB Foundation, around the site where her house is now being rebuilt following the fire in late 2020. 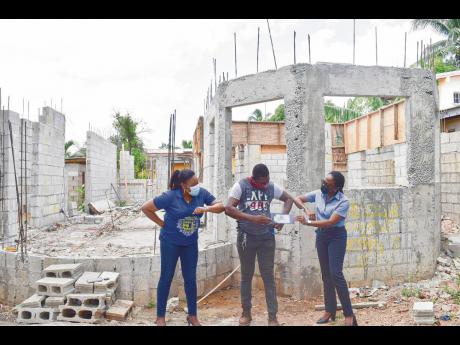 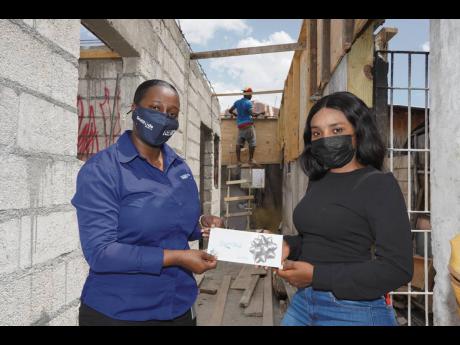 The NCB Foundation has extended its 2020 Grant a Wish programme to lend a helping hand to two families in need. Rayon Ellis and Ayana Humber both lost their homes and much of their belongings to fire last year, but they have each received $150,000 to aid in their rebuilding efforts, and are grateful for the ability to get back on their feet.

When his sister passed three years ago, Ellis took on the responsibility of caring for his nieces and nephews, as well as his older brother who has special needs.

A family man in every sense of the word, Ellis, a former choir director and musician at the Pentecostal Cathedral Church in May Pen, is currently employed as a part-time contractor at Jamalco. He also runs a music and photography business, renting a range of equipment, doing as much as he can to make sure that his family of seven can live comfortably.

Ellis’ home is a safe space for his large family. It was the home of many family reunions, cookouts, music sessions and domino games. Wedding bells were in the air as a ceremony was in the works for Ellis and his fiancée. Despite the challenges, the year 2020 wasn’t too bad for Ellis’ family until one Sunday morning in September when a fire broke out at their May Pen home, leaving only ashes behind. The fire was caused by a light bulb exploding, catching an old mattress in the room and a bottle of gasoline.

Life came to a screeching halt for Ellis and his family. Since the fire, the family, including his three nieces aged five, 14 and 17; his nephew and his older brother have been displaced, most living temporarily with other family or friends while Ellis lives out of his car.

“I keep feeling like this was all a nightmare that I wish I could wake up from. We lost basically everything. I was supposed to be getting married, that has now been put on hold. My businesses were doing well, but I’ve now lost basically all of my equipment - PA system, drum sets, guitars, keyboards, cameras, lenses etc. I had just purchased a stove, bed, microwave and fridge. It all went up in flames,” Ellis lamented.

He added: “I’ve had to fold up all the seats in my car to prevent me from having the severe back pain I was having before. The kids are living in less-than-ideal circumstances, but I’m so grateful to everyone who has helped us pick the pieces back up and keep things as comfortable as possible since the fire.”

Despite the challenges, Ellis says he is hopeful and looking forward to better days. “This donation from NCB Foundation and the help we’ve gotten from other family and friends has really been a saving grace,” he said. He is now looking to erect two rooms and a bathroom to start. “I just want to have a roof over our heads, and for us to be reunited as one big happy family. That’s all I want,” he said.

Humber had her sights set on a merry and bright holiday season. The 25-year-old had recently graduated from The University of the West Indies with a bachelor of science in psychology and was gearing up to start her own online business, an online boutique called Image Kit, in hopes of providing for her family.

An entrepreneurial young woman who is intrinsically motivated and driven by her dedication to her family, Humber knew she would have to make sacrifices to reach her goals and be successful, but never imagined having to start from scratch, especially not when she was ready to hit the ground running. But that was the case when her family’s three-bedroom home in downtown Kingston was razed in an unexpected, untimely fire, leaving her family among 30 others left homeless.

Before the fire, Humber lived in the house with her mother, father and her younger brother. “It was a welcoming home; everyone felt like family when they came there. It was the go-to gathering place, and if you ask anybody in the community, they’ll tell you the same,” Humber explained.

She had recently secured the majority of her items for sale when the fire struck. “My mom and I were the only ones that were home at the time. We were going through a few clothing items that we wanted to donate to the less fortunate when we heard someone shout ‘Fire!’ from outside. Thinking it was something minor and the person just needed an extra hand, I ran outside. But when I got there, it was blazing, and the person said, ‘Nuh bodda help me, help yourself,” Humber recalled.

She added, “We grabbed what we could, our documents etc., by which time the flames had already made it into the house. It all happened so quick. At one point, I remember being in tears begging my mom to just leave everything behind because I’d rather start from scratch than us dying in a fire. It was the most traumatic experience.”

The family is now staying with relatives while they pick up the pieces and begin the rebuilding process. Humber’s mother, an entrepreneur as well, also lost all of her inventory. Her father, an independent auto electrician, lost most of his tools, machinery and laptop on which he organises his business. “We lost everything a home should have,” Humber lamented. “God sent some really good people to bless us though, friends and family who are helping us get back on our feet.”

To augment the family’s efforts, Humber launched a GoFundMe page to raise funds towards rebuilding the family home. It was through this crowdfunding effort that the NCB Foundation learnt of the family’s dire situation. Humber said she now feels confident that her family will be able to have a fresh start, especially after this horrific experience and the universal challenges that 2020 brought.

“To summarise, 2020 humbles a lot of us, including myself. It was a year of self-reflecting, birthing new ideas and relearning and adjusting our modes of survival and coping. My main hope for the future is that my family is happy, together and safe, and that my business will continue to expand and that I can give someone an opportunity for employment,” she said.

More than 60 recipients across Jamaica have been assisted through this year’s NCB Grant a Wish programme. The 2020 allocation for the annual programme, which invited Jamaican to nominate and vote for recipients in five categories, was increased from $12 million to J$19 million, in light of the tough year for many Jamaicans. Some 24 children’s homes, 17 individuals in need, five nursing homes, 19 special needs organisations and five organisations in need received a share of the $19 million.