Seaforth resident blames himself for friend being set ablaze 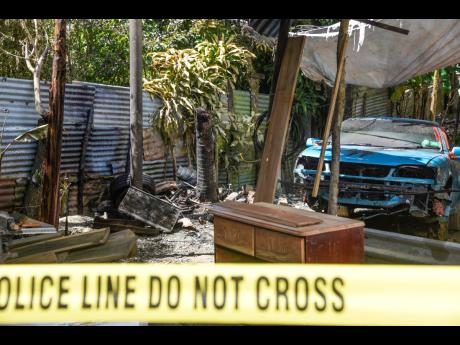 Nicholas Nunes/Photographer
The yard where mechanic Andrew Richards was seriously injured in a blast while working on his car. He later succumbed to his injuries in hospital.

Community members of Seaforth in St Thomas are alleging that there is foul play surrounding the death of a mechanic in the area while undergoing treatment for burns to his entire body, following an explosion at his home-based garage.

At the time of the blast, 42-year-old Andrew Richards of Moodie Lane in the community was reportedly working on his private motor vehicle in his yard that he shares with his brother, who also operates a furniture shop on the premises.

Reports from the police are that on Monday, March 15, residents heard a loud explosion and went to investigate. Richards, also called ‘Billim’, was seen engulfed in flames.

The fire was put out and the injured man rushed to the Princess Margaret Hospital in the parish before he was transferred to the Kingston Public Hospital, where he succumbed to his injuries the following day.

While it is being suspected by the police that the source of the explosion is a fault of the vehicle on which Richards was reportedly welding, community members and fellow workmen have rubbished the claim, revealing that the vehicle had no engine in it at the time of the incident.

“Them a seh he was welding and that is the cause of it, but a 30-odd years now I doing mechanic and welder work, and I am 100 per cent sure this type of thing can’t happen in the way they are saying it happened.

“A vehicle without engine blow up? Is not gas tank the man working on, and even so, if you don’t have open flames it can’t blow up like that,” said a man, who only gave his name as ‘Prento’.

“You can even light a cigarette and put it in the gas tank and it don’t explode. The vehicle don’t have no engine … no battery nuh in it weh coulda cause a fire. Somebody would have to deliberately light a flame. A foul play dat, man,” he continued, adding that the matter needs to be thoroughly investigated and the perpetrator brought to justice.

Further reports from the police revealed that the brother of the deceased made a report at the station that he is being accused by residents of setting his brother on fire.

When contacted, head of the St Thomas Police Superintendent Allison Byfield shared that while the matter is still being investigated, it is being treated as a death by misadventure.

“We have retrieved CCTV footage that will be examined by the relevant team, but right now whether it was an accident or a homicide, is undetermined.

The victim told hospital staff he heard an explosion and then he was engulfed in flames. As far as we know, he was doing some welding work on a vehicle and it is suspected that the gas tank exploded,” she shared.

Though the space where the incident happened was cordoned off by police tape, our news team observed that the area surrounding the vehicle in question bore testament to an explosion. However, the car itself seemed unaffected by fire.

“A neighbour who was first on the scene said he saw the fire and moved to put it out, then he heard Billim saying ‘Help’! from a drum of water. His shoes are still at the foot of the drum, and you can still see his skin in the water,” said a distraught member of the family.

With streams of tears running down his face, Anthony Campbell, who was identified as Billim’s closest pal, told The Gleaner that he blames himself for his friend’s misfortune.

“Mi and dat man a par for years. He was an excellent mechanic. Mi learn the trade from 1998 and a him teach me, so a long time him doing this. Only God alone can tell me is not somebody kill him.

“I went by him on Monday and left. While I was down by the garage where I work, mi just feel seh something nuh right and move same time. When mi reach … mi friend nuh look good,” he cried.

Choking through tears, Campbell continued, “Now it coming like mi a blame myself that I left, because what me come road come do neva necessary. Mi heart a bleed.”