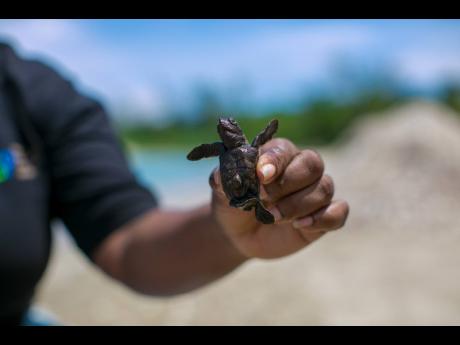 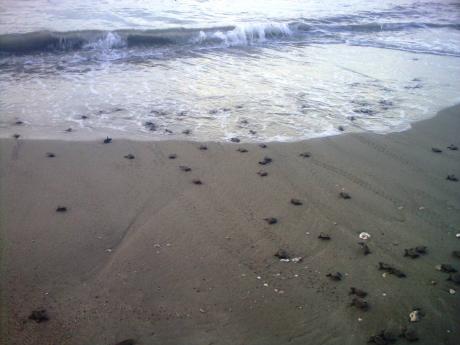 While the boon in construction along the Trelawny coastline, which has yielded nearly 2,000 additional hotel rooms and numerous job opportunities, is being celebrated, it is also decimating two of the endangered species of turtles in Jamaica, the greenback and hawksbill.

The steady decline in the population of the of the turtles has not gone unnoticed, especially in the area spanning Rio Bueno to Wiltshire, where residents believe that unless urgent action is taken, they could be wiped out in the area.

“At one time between August and November each year, I would see turtles coming and going from their nests. I would see their tracks along the beach. Later, I would see the little ones rushing to the sea,” noted fisherman Ewan Kenton, who has been operating in the area for over 30 years.

“There were times when going out to sea, you would have to look for the young ones. There would be fishermen whom I had to quarrel with as they killed them for meat and eggs. It is no longer necessary because the turtles are now few and far between,” added Kenton.

Like Kenton, Delroy Boswell, an environmentalist who lives close to the beach in the Duncans Bay area, is deeply worried that enough is not being done to protect the turtles and he fears their ultimate extinction.

“The turtles are not only endangered but they are on the brink of extinction,” said Boswell. “Studies have shown that despite the hundreds of turtles that are hatched yearly, only a small percentage survive to adulthood.”

In acknowledging the present dilemma with the turtles, the National Environment & Planning Agency (NEPA) says the various developers were given guidelines to protect the turtles, but these are being ignored.

“Development has taken over the nesting sites. They (the developers) are given guidelines to follow and are expected to establish a turtle monitoring programme. Sadly, not all the developers follow the guidelines,” said Damani Calder, an officer with NEPA.

In addition to the displacement caused by development, Calder also noted that the situation is not being helped by the poachers, who are hunting the turtles for food.

“It is now a dangerous time for turtles, especially the females. Poachers are always looking to rob the nests for the eggs and meat. This illegal activity reduces the number of turtles that come to the nest. This causes a decline of the cycle of reproduction,” stated Calder.

At the Excellence Oyster Bay Resort in Falmouth, where there is an active effort to protect the turtles. Teeshan Gordon, who serves as loss prevention officer, says the improper disposal of plastic, which at times ends up in the ocean, is also contributing to the demise of the turtles.

“There is a plastic ban, which is not strictly observed. We find turtles being washed up on beaches. When we open them up, their stomachs are all tied up by plastics. They are eating, but they are starving. No space is in their stomachs to make use of the food they eat,” said Gordon.

“We at the resort recognise the need to protect the environment. We know that we are in their (the turtles) space, so as a compromise, we have established a sanctuary and the turtles come and lay there. The eggs and young ones are protected. We know what time the eggs hatch and we ensure that the young ones are released on the beach, where their natural instincts cause them to make their way out to sea.”

According to Calder, the turtles contribute to the environment in addition to being a source of food.

“The greenbacks are herbivores … . They eat the top of the seagrass where organisms attach themselves,” said Calder. “The seagrass is a sanctuary for all different kinds of fish to hide from predators until they mature. The hawksbills feed on the sponges and ensure that there is a hard structure on the reef to protect wall erosion.”