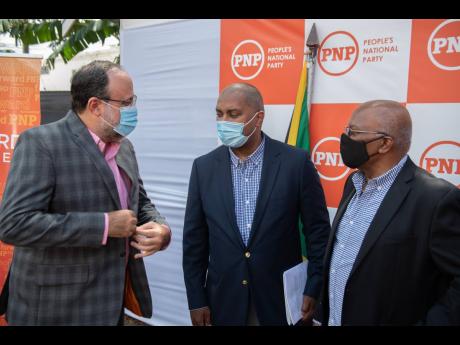 Gladstone Taylor/Multimedia Pho
From left: Opposition Leader Mark Golding converses with Spokesperson on Finance Julian Robinson and the spokesperson on health, Dr Morais Guy, following a post-Budget Debate media briefing, held at the office of the leader of the Opposition in St Andrew on Wednesday, March 24.

The Opposition People’s National Party (PNP) has blasted the Government for its failure to address “the most pressing issues affecting the Jamaican people” during the Budget Debate, which ended on Tuesday.

It took particular issue with Finance Minister Nigel Clarke for not detailing the Government’s fiscal response to the bed space and oxygen crisis at hospitals caused by an influx of coronavirus patients.

“He said nothing about that. What could be more urgent than the provision of funding to save the lives of sick Jamaicans?” Opposition Spokesman on Finance Julian Robinson asked on Wednesday during a press conference at the office of the leader of the Opposition.

“The minister has showed a callous disregard for the hardships being faced by the Jamaica people,” he charged.

Robinson also questioned Clarke’s challenge to the accuracy of a report by the Inter-American Development Bank (IDB), which showed that Jamaica has spent 1.27 per cent of GDP as a response to individuals and households.

“The table in the report from which the opposition spokesman quoted was erroneous, not by 10 per cent or 20 per cent, but the table that he quoted from was wrong by 100 per cent,” Clarke asserted, as he referenced a letter from the IDB acknowledging the error in Gordon House on Tuesday.

However, Robinson countered by declaring that the International Monetary Fund’s data on Jamaica’s fiscal response to COVID was consistent with the IDB’s.

“Is it that both of these institutions, who have been long-standing partners of Jamaica, got the data wrong? Should we dismiss the data from these two international financial institutions and accept the minister’s assertions?” he asked.

Robinson also accused Clarke of disregarding data from high-level sources when the conclusions are not to his liking. He cited a study done by the United States Department of Agriculture on food poverty, which the opposition spokesman said the minister dismissed on the grounds that it was a theoretical study and did not represent measurements of real people in Jamaica.

“Is he also dismissive of the recent study by UNICEF Jamaica and Caribbean Policy Research Institute, which showed that 45 per cent of households have had to cut back on food because they simply cannot afford it?

“Most households coped with food shortages by eating smaller meals or eating fewer meals per day. The reality is that many Jamaicans are suffering from food poverty, and whether there is a formal study or not, our experiences in interacting with persons confirm this fact,” said Robinson.