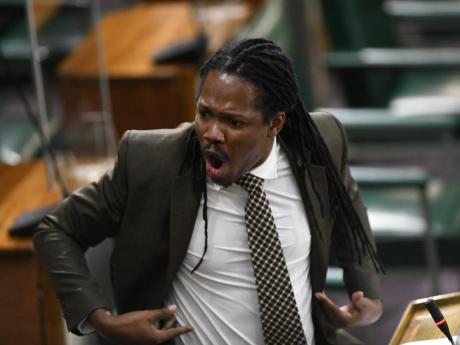 Damion Crawford... Many who have criticised Mr Holness have been arrested and publicised on the Internet.

The Upper House descended into a shouting match today after Opposition Senator Damion Crawford charged that many people who have criticised Prime Minister Andrew Holness have been arrested.

A chorus of objections came from the government side with Kamina Johnson Smith, leader of Government Business, leading the charge.

Debating the Appropriations Bill, Crawford sought to defend his colleague Julian Robinson in the Lower House who presented a table with significant percentage increases in the price of basic food items over the period 2016 to 2020.

Robinson’s percentage numbers were challenged by Finance Minister Dr Nigel Clarke who claimed they were inflated.

"I was privy to the information that Julian Robinson received from one popular food retailer with multiple branches across the country," he said.

"I am also aware of the name of the food retail entity but the entity has asked that its name be not released. Like many other entities, like many other individuals, the entity and its operators are afraid of government 'badness'," Crawford said.

Opposition Senator @DamionCrawford sparked controversy in the Senate today when he declared that many people who have criticised Prime Minister Andrew Holness have been arrested and publicised on the Internet.

The Opposition senator said that "the Government badness" has been a feature of the approach of the JLP Government.

Heckled by government members Crawford added: "You embraced a song called ‘Government Badness - Andrew Holness’, so you speak to the things you embraced."

"Many who have criticised Mr Holness have been arrested and publicised on the Internet," said Crawford.

His comment was interrupted by a seemingly incensed Johnson Smith who rose on a point of order.

"This senator is misleading the House and he must withdraw those allegations. They are untrue, they are baseless and they should be withdrawn; they should not remain on the record of his honourable chamber,” she said.

"You have made an allegation against the prime minister of this country and you are either going to withdraw it or substantiate it," he said.

At first, Crawford resisted the call to withdraw his controversial remarks.

However, he was pushed by Government senators Charles Sinclair and Don Wehby to retract.

“There has been nobody who has been arrested for criticising the prime minister,” Sinclair declared.

Crawford retorted: “I could speak to an individual who had to come on social media and apologise...”.

But Tavares Finson would have none of it.

Declaring that he was rising on a point of order for the first time in his second stint as senator, Wehby said: “We have to remember that we have an international audience also, that statement is very damaging not only to the prime minister but to the country of Jamaica.”

Signalling that he would move on, Crawford was met with a chorus of ‘No’s’ from members on the government benches who demanded a retraction of his comment about Holness.

Leader of Opposition Business Peter Bunting said he was not sure what his colleague was being asked to withdraw.

Tavares Finson responded: “He has made an allegation that anybody who criticises the prime minister is arrested.”

Bunting sought to clarify, saying Crawford made a statement of fact.

“He said that persons who had criticised the prime minister were arrested. That is a statement of fact – that is not in dispute,” said the Leader of Opposition Business.

“No matter how you spin it Mr Bunting, it was said within a context,” the president replied.

"It can’t be denied Mr President that some people who have criticised the prime minister have been arrested. We must avoid this road to dictatorship,” said Brown.

Crawford later said he had no intention to impute any motive in his remarks about the prime minister.

“If that be the case, withdraw the statement and let us move on,” said Tavares Finson.