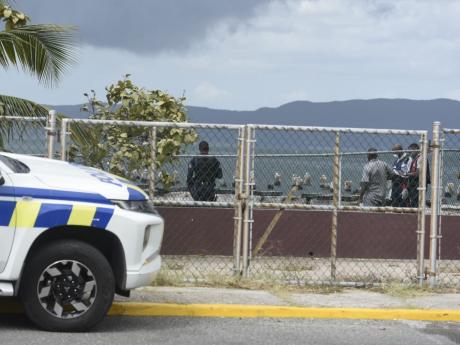 Police investigators at a crime scene on the Waterfront in downtown Kingston Friday. The body of a man was found - Nicholas Nunes photo

The National Security Ministry has released a statement saying the security forces are on high alert to enforce stringent COVID measures.

The issue was among the matters discussed at Thursday's meeting of the Andrew Holness-chaired National Security Council.

The government has enforced three weekends of lockdowns starting this Saturday at noon until Monday at 5 o'clock in the morning.

According to the ministry, Prime Minister Holness instructed that the measures be strictly enforced. The matter of crime was also on the agenda of Thursday's security council meeting.

"The Government reiterated its stance on ridding the country of guns, gangs and dons," said a spokesperson in the statement from the ministry.

Holness reportedly received a comprehensive brief and operation update on security matters and hotspots and advised on the potential for escalation given the current volatility in some areas.

The Prime Minister directed that additional resources be deployed in these areas to keep the peace.