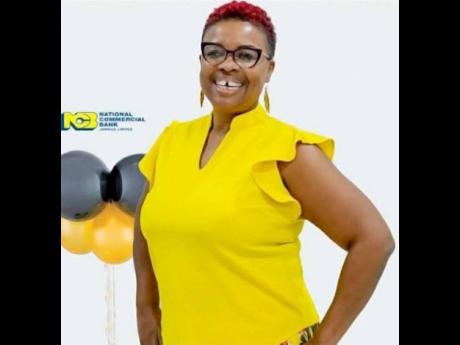 Before sentencing the getaway driver in the killing of banker Andrea Lowe-Garwood to seven years in prison yesterday, Justice Lorna Shelly Williams emphasised that she was not sentencing him in relation to the murder at this time.

The 23-year-old storekeeper, Leon Hines, was sentenced to six years for illegal possession of firearm and one year for accessory after the fact to murder, when he appeared in the Home Circuit Court. The sentences are to run concurrently.

The father of a two-month-old son bowed his head for most of the time during the brief sentence hearing and after the sentence was passed, he seemed as if he was in a daze.

The Rose Heights, St James, resident is among three persons charged in connection with the brazen daylight murder of 51-year-old Lowe-Garwood inside a church in Falmouth, Trelawny, on January 31.

She was shot dead while worshipping at the Agape Christian Fellowship Church, allegedly by a man who sat in the pew behind her.

Two other men – Javan ‘Janoy’ Garwood, 29, the stepson of the deceased; and Dwight Bingham – have been charged in relation to her killing.

Hines, a Cornwall College past student, was initially served with six charges, but under a plea deal, he pleaded not guilty to conspiracy to murder, murder, accessory before the fact to murder, and misprision of felony, and no evidence was offered on each count by the prosecution.

But Justice Shelly Williams, apart from stressing that he was not being sentenced yesterday in relation to the murder, did not give any further indication as to whether he will be asked to answer to the murder charges at a later date despite securing a plea deal.

Earlier, before she handed down the sentence, Hines’ attorney-at-law, Michael Hemmings, asked her to take into account that the offender had pleaded guilty at the first opportune time, thereby demonstrating his remorse and also that he had no previous conviction and, prior to now, had no brush with the law.

While acknowledging that Hines’ role in the murder was wrong, Hemmings said nevertheless, his client has accepted that he did something bad and has expressed remorse.

The attorney, while further highlighting that Hines has an excellent antecedent and community report, also asked the court to honour the conditions of the plea bargain.

According to the Hines’ antecedent report, he grew up in a stable family and left high school with seven Caribbean Secondary Education Certificate subjects with passes in grades one, two and three.

The court also heard that after leaving school, Hines did further studies at HEART/NSTA Trust and was successful in completing courses in systems administration and computer network engineering.

Hines did stints in different jobs as an accounting clerk, debt collector and a research associate. At the time of his arrest, he was employed to the Cornwall Regional Hospital as a storekeeper.