Hundreds of seniors inoculated so far during first mass vaccination 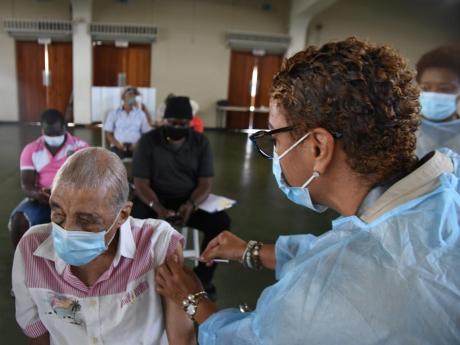 A senior citizen is vaccinated by a health worker with the first dose of the Oxford-AstraZeneca vaccine at the National Arena in St Andrew earlier today. The government is conducting a mass vaccination exercise targeting 1,000 seniors age 75 and over.

About 300 elderly people have so far received their first shot of the Oxford-AstraZeneca vaccine now being administered by the Ministry of Health and Wellness in a mass inoculation exercise.

The exercise is taking place at the National Arena in St Andrew.

The government is today targeting 1,000 seniors aged 75 and over for inoculation.

Minister of Health and Wellness, Dr Christopher Tufton said the process has been going smoothly.

"So far so good. We have had a number of persons coming in and the feedback received has been very positive. We hope to complete the day successfully," he said.

He said the government hopes to replicate the "blitz" exercise at select centres across the country.

"We are really learning from this experience and I believe commendations are in order for the team: the army, the JCF (Jamaica Constabulary Force) and, of course, the health team that has led today," he said.

Marcia Thomas Yetman, public health nurse, said the team on site started minutes after 9:00 a.m. ahead of the planned 10:00 o'clock start time, to mitigate against a bottleneck.

"We have not had any major issues. Little glitches here and there- registration, delays... Generally speaking, it has been going beautifully and as expected," she said.

Thomas Yetman, who was also the first person in the country to receive the first shot of vaccine, also continued to encourage persons to get vaccinated.

She said some of the other symptoms people may experience are mild fever, joint pain and headache. However, she said the symptoms dissipate quickly and can be treated with over-the-counter medication.