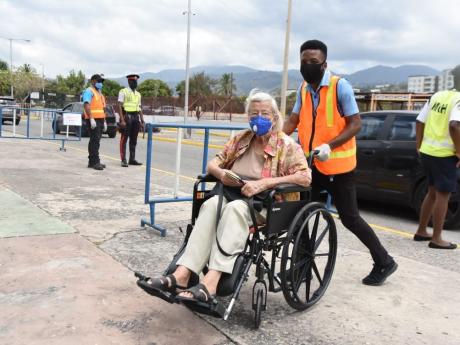 An elderly woman is assisted by a worker at the National Arena, where a mass vaccination of senior citizens 75 years and older is now taking place (Kenyon Hemans photo).

More than 33,000 Jamaicans have received the first dose of the Oxford-AstraZeneca COVID-19 vaccine as of March 25.

This was announced by Minister of Health and Wellness Dr Christopher Tufton on Friday during a media briefing ahead of today's mass vaccination now underway at the National Area in St Andrew. The government hopes to vaccinate more than 1,000 senior citizens age 75 and over.

The total 33,642 inoculated so far represents 71 per cent of the target for the month and approximately half of the stock the government has received. Tufton said there is enough stock to last for about three weeks.

But he admitted that Jamaica could see some fallout from the World Health Organisation's COVAX facility's inability to deliver vaccines over the next month, based on the posture of rich countries, which have pulled the plug on vaccine exports.

“The real challenge is over the next month to six weeks and we have to manage that. If we have to suspend for a while, we will just have to. It would be regrettable, but it is a possibility,” Tufton stated.

Jamaica is expecting a delivery of 26,500 doses of AstraZeneca vaccine, but there is uncertainty about whether the quantity will be delivered, since India became the latest country to suspend vaccine exports.

“Vaccine nationalism is real, and it does undermine the concept of vaccine equity, which is something that COVAX was intended to achieve, but now has become a victim of because they can’t get the supplies,” Tufton asserted.

Despite supply concerns, the health and wellness minister said he did not foresee a challenge with administering the second jab of the AstraZeneca vaccine within the recommended eight to 12- week time frame.

“I really do think that the market will adjust globally, and I am certainly hoping for that. There is always an outside possibility that it may not happen, but I think based on what is happening in those countries that are prioritising their own population, I think they are moving at a pace where we could see some freeing up,” Tufton reasoned.

He said persons who received the first jab would have gained an advantage of about 30 per cent protection from the disease.