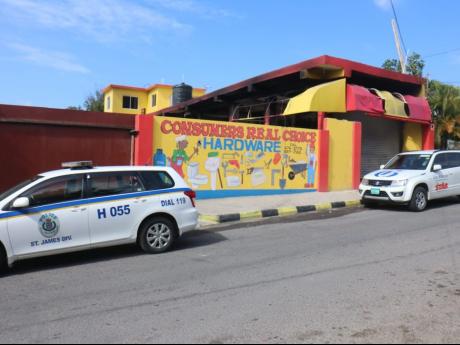 The Consumers Real Choice Hardware store, which was damaged by fire earlier this afternoon. A woman and her baby, who live on the premises were rescued from the blaze (Hopeton Bucknor photo).

Fire Fighters and the police are still at the scene on McKenzie Drive in Flanker, St James, where a young mother and her child were rescued from a burning hardware store.

The mother and her baby, who resided on a section of the building, were trapped by the fire. They were rescued by residents and the woman's father, who travelled to the scene after receiving the news.

A resident who gave an account of the incident to The Gleaner, said the police, who were attending to a motorist nearby, were first summoned.

The resident continued: "The police was down there so with a bus man, so they run go call the police and the police said that was not their job."

The resident said there where then screams coming from the building and the police were called again, but the resident claimed that there was still no action from the lawmen.

"Everybody try jump the fence and something. All now them don't come up here. You know when them come up here? When the firemen come and the fire out you see them walk come up here," the resident claimed.

A brother and a cousin of the resident assisted the woman eventually, the resident claimed, along with the woman's father, who had to jump the fence of a cousin's premises next to the dwelling to open a gate so others could assist the woman and baby to escape.

"When them pull the gate, them take the baby first and then them take her (the woman out)," the resident recounted.

The police reported to The Gleaner that fire was seen coming from a section of the Consumers Real Choice Hardware store about 1:00 p.m., and the fire department was called.

Assistant Superintendent at the Freeport Fire Station, Keneisha Vacciana, said three fire units responded from the Ironshore and Freeport fire stations, along with an ambulance.

Fire fighters only managed to cool down the blaze, as the contents of the hardware store were destroyed.

The Gleaner understands that damage is estimated at approximately $10 million.

Vacciana said the cause of the fire is being investigated.