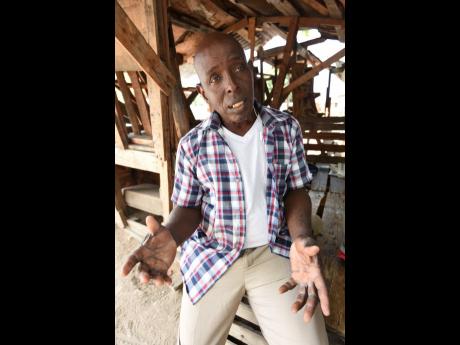 Having taken a battering from bad weather in the form of strong breezes which since January had limited their trips out to sea, as well as wreaked havoc with their catches, fisherfolk at the Greenwich Farm Fishing Village in Kingston were preparing for the usual robust uptick in fish sales and the other trickle-down effects it usually brought. For this reason, they were unprepared for the drastic weekend lockdown measures announced by the prime minister, as a desperate prevention measure to curb Jamaica’s growing COVID positive infection rate.

In fact, coming on the heels of the significant catch declines since the start of the year, Winston Monroe, chairman of the Greenwich Town Fisherfolk Benevolent Society, sees it as a misguided measure, which failed to take into account the day-to-day realities of the many different people who make their living from fishing-related activities.

The fact that the main lockdown will take place over three consecutive weekends during the period of Lent, when fishers across the country usually enjoy their best sales, will definitely hurt the industry, according to Monroe. Already reeling from the fallout caused by bad weather, things will only get worse, he argued.

‘The restrictions will make it extremely bad for us because most of the people work during the week and on weekend is when them find the time and money to come from all over Jamaica to buy fish. Easter is the fishers’ Christmas because during Lent, nuff people follow a tradition and cut of the meat and eat more fish, and so we always look forward to the pickup in sales. Most sales take place on weekends,” he reiterated.

The boom in business is reflected in the fact that while most fishers usually go to sea two times per day – in the morning and at night – during Easter they may make as many as five trips per day.

“As them come in, fish will blow out (sell off) and them haffi gone back a sea because the demand is greater during this period. The closer you move down to Easter, the more the demand grow.”

While seeing the need for measures to stem the spread of COVID-19, Monroe is convinced that Jamaica’s decision-makers are blissfully unaware of the daily reality of life in the inner city. He argued that insulated as they are by socio-economic differences, they have no idea of the impact of decisions made in a vacuum, on the lives of the people most affected.

“A major part of the problem we have is that there is no consultation. People sit inna them office, do the maths pon the thing and them just impose it because we nuh have no say. Their lifestyle divorced from our lifestyle because them is people weh nuh mingle. When them go home pon the weekend them have a big house where everything is under one cover, so them nuh have fi come back out. Food deh deh fi the whole month or beyond.”

For people in the inner city who are without a 9-5 or even a job skill, the beach can be a haven, where they can earn an income by scaling fish, going to buy gasolene for boat owners, picking fish from nets, helping to offload fish or equipment from a boat, helping to repair a boat or make a fish pot, among other things.

Monroe summed it up this way: “Most people who go out deh, a hustle them a hustle, them will do something fi other people, so is a daily bread thing, and now instead of getting better it is going to get worse.”

We caught up with Erica Anderson, who had bought three pounds of fish and was waiting as Aaron, the fisherman from whom she made the purchase, quickly and efficiently scaled them. She insisted that he was a “good bredda” and always treated her with respect.

“”From me a come here, me never have nuh problem with him,” she said.