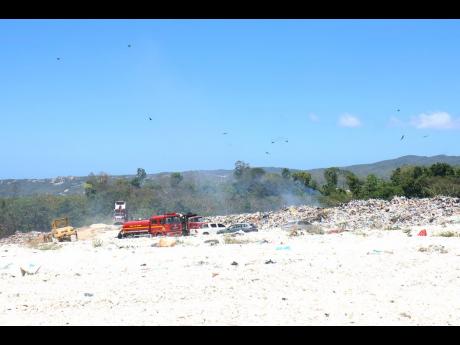 Ashley Anguin/Photographer
Firefighters and Western Parks and Markets workers trying to control a fire at the Retirement dump in St James on Tuesday.

Thick, black smoke blanketed several communities in St James after an early-morning fire ripped through the Retirement dump near Granville before being brought under control.

Garnet Edmondson, regional operations manager at the Western Parks and Market, which has oversight of the dump, said that the fire started shortly after 2 a.m.

Edmondson said that a fire warden alerted the landfill manager to the blaze. The Jamaica Fire Brigade responded within 15 minutes, he said.

An initial investigation concluded that the fire was caused by spontaneous combustion – a common occurrence at landfills.

Additional work would be done to ensure that underground fires were completely extinguished, he said.

“The smoke nuisance is 60 to 70 per cent under control and the surface fire is under control,” Edmondson told The Gleaner shortly after midday.

“... So after the smoke and surface fire is cleared, we will have to spend some time excavating the fire that is under the ground and apply pack cover material to fill the area,” he added.

Edmondson apologised to the affected residents in Retirement, Granville, Tucker, and Pitfour, who were worst affected by the smoke nuisance.

But Collette Smith, a resident of Granville, is tired of the empty promises.

“Every time we have this smoke problem, they tell us that they are going to put measures in place to put an end to it for good, but after a few months, it happens all over again,” Smith told The Gleaner.

“People who have respiratory problems are constantly on edge because these fires just keep happening year after year.”

Tuesday’s fire was not as devastating as others in the past.

In 2019, following a major fire, Winston Lawson, the then president of the Montego Bay Chamber of Commerce and Industry, said the blaze had caused “major inconvenience and distress” and called for a permanent fix to the recurrent fire.

“We again appeal to the authorities to rectify this matter with alacrity and on a permanent basis,” said Lawson at the time.

“The situation is grossly unacceptable and influences concerns as to whether the authorities are not concerned enough about finding a permanent solution to this problem.”