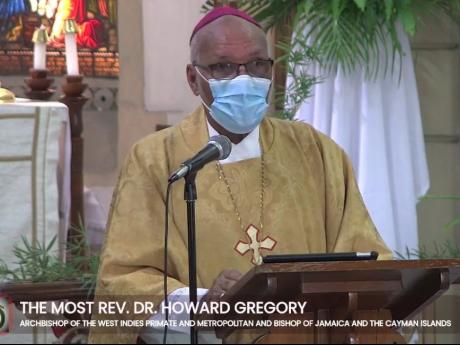 Gregory: “We must acknowledge, as a church, the way in which some of our attitudes and teachings within the Christian community have been used to undergird the negative and violent attitudes and behaviour with which our women must now contend.”

The Anglican Bishop of Jamaica, Reverend Dr Howard Gregory, used his Easter message to call for the Christian church in Jamaica to accept that some of its practices are used to justify violence against women.

The appeal for introspection from one of the country’s most senior Christian leaders comes as Jamaica grapples with the latest spate of crimes against women, including murders, abduction, and death threats.

“We must acknowledge, as a church, the way in which some of our attitudes and teachings within the Christian community have been used to undergird the negative and violent attitudes and behaviour with which our women must now contend,” said Gregory, as he delivered a sermon at the St Andrew Parish Church this morning.

His message was based on the biblical account of Jesus’ resurrection by the disciple St John, in which Mary Magdalene, a character saved from punishment for being a prostitute, was the first person to whom Jesus appeared.

Gregory said that encounter was “strikingly countercultural” because it involved an event considered the most central to Christian belief - the resurrection of Jesus – being revealed first to a woman in a male-dominated society.

But despite that, he lamented equality and equity for women in Christianity is still a major problem.

“Even to this day, there are Christian traditions that assert that the woman’s place is to be silent in church and not occupy positions of leadership over men or even over other women who constitute the core of the church.”

Last week, lawmakers added their voices to the public outrage over the most recent incidents amplified by last month’s murder of 20-year-old Khanice Jackson, an accounting clerk from Portmore, St Catherine.

Yesterday, the police discovered the body of missing woman, Millicent Robinson, in a shallow grave at her home in Craig Town, St Andrew.

The hunt is still on for missing Clarendon teacher, Nattalie Dawkins, 44, while quick action by the police led to last evening’s arrest of a St Catherine man who threatened to kill his ex-lover for “hurting” him by leaving their relationship.

Gender Affairs Minister, Olivia Grange, told Parliament Tuesday that women were being “brutally killed in the epidemic of domestic violence” in Jamaica.