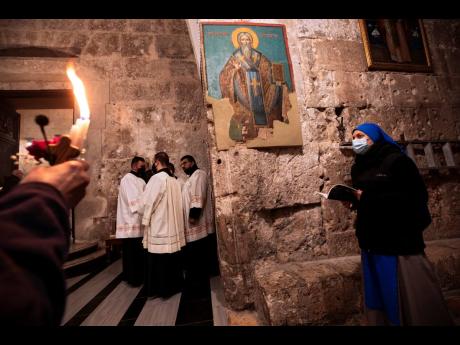 The Associated Press
Priests and a nun wearing face masks attend Easter Sunday Mass at the Church of the Holy Sepulchre, where many Christians believe Jesus was crucified, buried and rose from the dead, in the Old City of Jerusalem, Sunday, April 4. (AP) 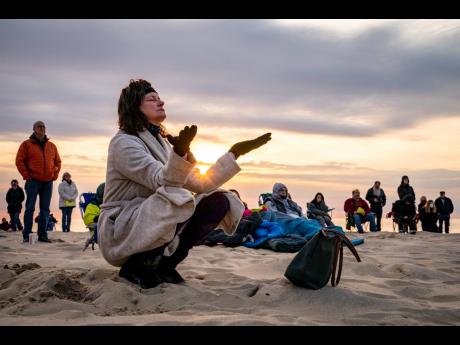 The Associated Press
Parishioners gather on a beach for an Easter Sunday service at sunrise hosted by Hope Community Church of Manasquan yesterday in Manasquan, New Jersey. (AP) 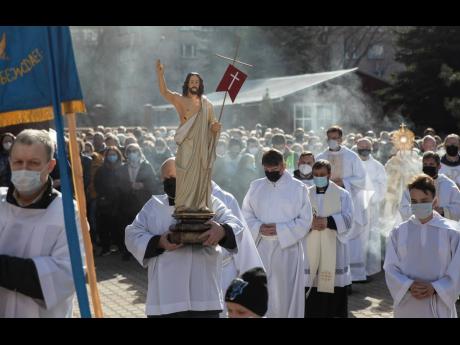 The Associated Press
Catholic priest carries a statue of Jesus Christ as he walks in religious procession during the Holy Easter celebration in the Cathedral of the Immaculate Conception in Moscow, Russia on Sunday. (AP) 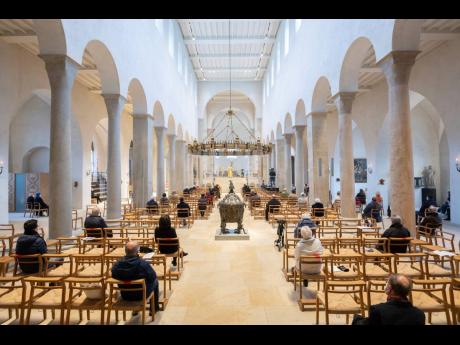 The Associated Press
Peoplke sit at a distance from each other in the cathedral during Easter services in Hildesheim, Germany, Sunday, April 4, 2021. Despite the Corona pandemic and numerous contact restrictions, churches are allowed to celebrate numerous presence services around Easter. (Julian Stratenschulte/dpa via AP) 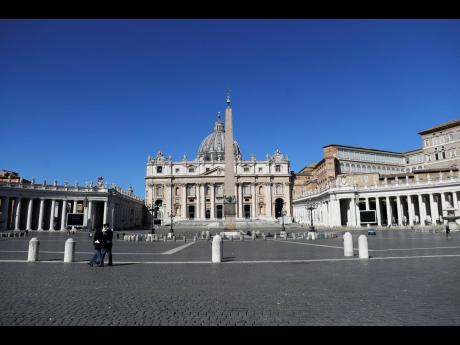 The Associated Press
Policemen patrol an empty St Peter's Square at the Vatican, Sunday, April 4. Italy has entered a three-day strict nationwide lockdown to prevent new surges of the coronavirus. Police set up road checks to ensure people were staying close to home and extra patrols were ordered to break up large gatherings in squares and parks, which over Easter weekend are usually packed with picnic-goers. (AP) 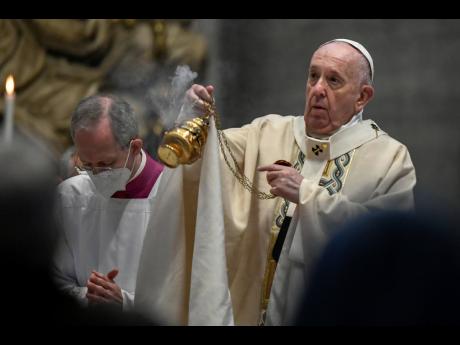 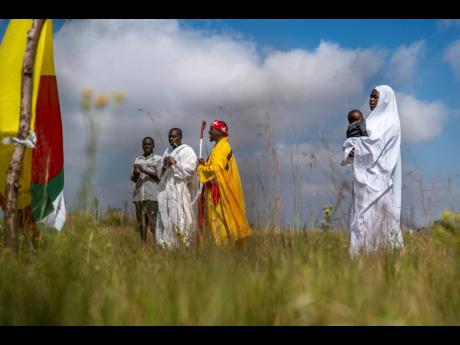 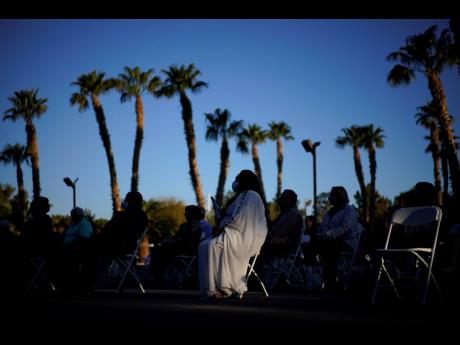 The Associated Press
People attend an Easter sunrise service at the Palm Eastern Mortuary and Cemetery in Las Vegas on Sunday. (AP)
1
2
3
4
5
6
7
8

Christianity’s most joyous feast day was celebrated worldwide with the faithful spaced apart in pews and singing choruses of 'Hallelujah' through face coverings on a second Easter Sunday marked by pandemic precautions.

From vast Roman Catholic cathedrals to Protestant churches, worshippers followed regulations on the coronavirus. In some European countries, citizens lined up on Easter for their turn to receive a COVID-19 vaccine.

In the Lombardy region of Italy, where the pandemic first erupted in the West, a hospital gave a traditional dove-shaped Easter cake symbolising peace to each person waiting to get vaccinated. Many who came were in their 80s.

A soccer team in Lyon, France, opened its stadium as a vaccination centre for the long holiday weekend. Some 9,000 people were expected to receive their shots there over three days as the French government tries to speed up vaccinations amid a fresh outbreak of infections.

In the Holy Land, travel restrictions and quarantine regulations prevented foreign pilgrims from flocking to religious sites in Jerusalem during Holy Week, which culminates in Easter celebrations. Pope Francis lamented that the pandemic has prevented some churchgoers from attending services.

At St Peter's Basilica, the 200 or so faithful allowed to attend looked lost in the cavernous cathedral. Normally, thousands would be at the Mass celebrated by Francis, and more than 100,00 would sometimes assemble outside in St Peter's Square to receive his Easter blessing afterward.

But this year, as in 2020, crowds are banned from gathering in Italy and at the Vatican. Francis delivered his noon Easter address on world affairs from inside the basilica, using the occasion to appeal anew that vaccines reach the poorest countries.

The pontiff sounded weary as he noted that pandemic measures have affected religious holiday traditions and kept some faithful from public worship.

"We pray that these restrictions, as well as all restrictions on freedom of worship and religion worldwide, may be lifted and everyone be allowed to pray and praise God freely,'' Francis said.

In Syria, where a national vaccination programme has yet to begin, churchgoers in the Lady of Damascus Church prayed for a way out of the economic and political crisis, only worsened by the pandemic.

“We came to the church for Easter so we get rid of the pandemic that we are in,” said Bassam Assaf. “Of course, we are not scared of coronavirus. It is the reality that we face, but it cannot stop us from coming and praying to God to take us out of this ordeal and help the world.”

A service at the Church of the Holy Sepulchre in the Old City of Jerusalem was celebrated by the senior Roman Catholic cleric in the Holy Land. That is the site where many Christians believe Jesus was crucified, buried and rose from the dead. Israel's successful vaccination campaign has allowed reopening of many places, including religious sites.

The pandemic kept Seville’s Brotherhood of the Holy Resurrection from sending its ornate Easter float, bearing a towering statue of Jesus, through the streets of the Spanish city. Instead, the Brotherhood posted videos and old photos from their last procession, two years ago.

In South Korea, Yoido Full Gospel Church, the country's biggest Protestant church, allowed only about 2,000 people to attend Easter service, or about 17 per cent of the capacity of the main building. Masked worshippers sang hymns and prayed as the service was broadcast online and by Christian TV channels.

Intent on tamping down weeks of surging infections, the Italian government ordered people to stay home for the three-day weekend except for essential errands. Premier Mario Draghi's government did allow one visit to family or friends per day in residents’ home regions over the weekend, which includes the national holiday on Monday.

Italy permits religious services in the pandemic if capacity is limited and masks are worn. But early on, the predominantly Roman Catholic country’s many churches were open only for individual prayer.

Hundreds of Catholics gathered in the mammoth Cathedral of St Paul in St Paul, Minnesota, for the Easter Vigil service Saturday evening. Every other pew was kept empty and masks were mandatory. Still, the solemn liturgy marked a new, hopeful beginning for the congregation after a turbulent year.

After all-virtual Easter services last year, St Patrick's Cathedral in New York City was at half-capacity for Sunday's Mass. Worshippers spaced themselves out in the vaulted neo-Gothic cathedral, which can seat more than 2,000. The choir sang through masks.

In Detroit, Hartford Memorial Baptist Church opened for in-person Easter services for the first time in more than a year, with capacity limits and social distancing rules in place. The Rev Charles Christian Adams told the Detroit Free Press that people need church, especially after the congregation lost at least 14 members to COVID-19.

Robin Fox of Palm Bay, Florida, planned to spend Sunday driving her mother to Orlando to get a second dose of vaccine at a Federal Emergency Management Agency walk-up site.

“She's getting that freedom on the same day that (people go to) church to celebrate Jesus being risen, so I said (to her), 'it's kind of like you're being risen also,'" Fox said.