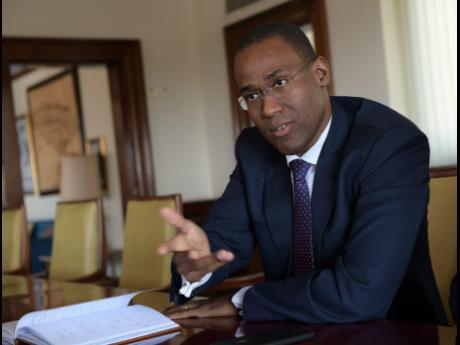 Clarke says that the improvements recorded in some sectors represent good news from the economy.

Finance Minister Dr Nigel Clarke says the continued shift in the level of contraction in the economy represents a good sign of the path to recovery.

Clarke is reacting to economic data put out by the Statistical Institute of Jamaica (STATIN) which has indicated that for the last quarter of 2020, the economy contracted by 8.3 per cent when compared to the similar quarter in 2019.

It is an improvement over the previous two quarters of 2020.

In June, the economy contracted by 18.4 per cent and in September, contraction was measured at 10.6 per cent.

The continued contraction of the economy, according to STATIN, is due mainly to an 11.1 per cent decline in the services industry.

The hotels and restaurants sector got the biggest hit, declining by 53.8 per cent.

It was also indicated that the mining sector broke five consecutive quarters of double-digit declines with a 6.3 per cent growth being recorded for the industry.

Growth was also recorded in construction, which moved up by 6.3 per cent.

Meanwhile, preliminary estimates showed that the gross value added declined by 9.9 per cent for the calendar year 2020.

This reduction occurred after seven consecutive years of growth and largely reflects the impact of COVID-19 on the Jamaican economy, according to STATIN.

Nevertheless, Clarke said the improvements seen in some sectors are good news from the economy.

“The other good news is that construction grew by 6.3 per cent for the quarter, having grown by seven per cent the quarter before. As is evident with the naked eye, construction is booming even in the pandemic,” he told The Gleaner.

It was also indicated that the inflation rate recorded a decline.

It was indicated that the decline in the inflation rate was mainly attributed to a fall of 1.3 per cent in the index for the heaviest weighted division ‘Food and Non-Alcoholic Beverages'.

Clarke argued that assertions that food prices were increasing upwards of 150 per cent since 2016 are an exaggeration.

Citing data from the Consumer Affairs Commission, he stated that the price of tin mackerel had increased by 34 per cent since 2016.

And cooking oil increased by 16 per cent since 2016, he said, citing data from the agency.

New tariff changes for the Jamaica Public Service Company, approved by the Office of Utilities Regulation, resulted in an increase in the price of electricity.