‘ENDS is the best thing since COVID’

Online delivery service gets thumbs up in MoBay 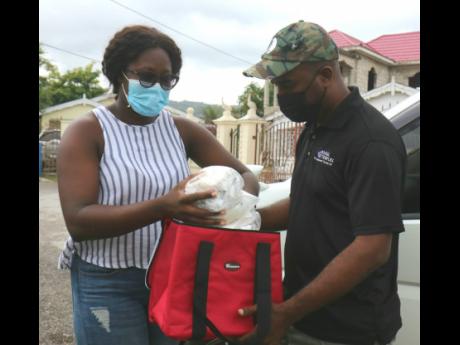 Ashley Anguin/Photographer
Nakieta Gordon receives her delivery from Andre Brown, owner of Sobestores, in Montego Bay on April 3. There have been rave reviews for the electronic-based delivery portal that allowed for drop-off of food and other supplies during the coronavirus lockdown on the weekend. 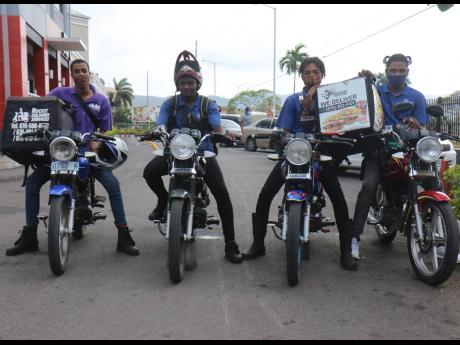 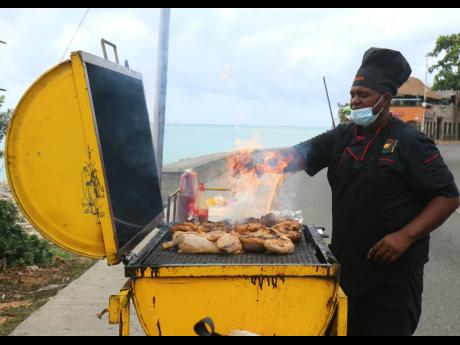 “The potential of this programme goes beyond pan chicken men. It’s about opening a new form of commerce to Jamaica but starting it in very small industries and watching it grow,” said Brown, the owner of www.sobestores.com.

Given the scope of his e-commerce platform, Brown said that when the Government introduced ENDS, he took the lead in the execution of the process to help the pan chicken vendors who operate along the Jimmy Cliff Boulevard by providing them with a website so that they could operate during the curfew hours.

He set up the website http://mobayhipstripjerk.shopsettings.com on behalf of the pan chicken men, which can process and accept orders, plus accept debit or credit payments online.

Speaking with The Gleaner on Saturday during the second of three consecutive weekend lockdowns, Brown credited his technical team who help to manage, dispatch and coordinate the various courier services.

“It’s been great, it’s been tremendous, and this is just the beginning, and it’s going so well, it’s just a sign of greater things to come,” he said.

The pan chicken vendors were a sell-off success on Good Friday night, and there was talk on Saturday that chefs could not keep up with the orders.

While things went as planned for the vendors providing goods and services for sale online, Brown said he would consider a few adjustments.

“I would tweak the number of items in which the pan chicken men are allowed to sell, narrow it down to chicken and juice,” Brown said in response to queries from The Gleaner about the fare.

He said that under ENDS, only approved courier companies are allowed to pick up and drop off orders to customers in a defined geographic space.

“For now, because we are doing a pilot programme, it’s important that we keep it as close as possible to Montego Bay’s city boundaries because we don’t have all the courier services available, so we have to keep it in areas that we can reach to within 10 to 20 minutes,” Brown said.

However, the vision, after the first phase, is to allow for deliveries outside of that bubble.

Meanwhile, jerk vendors and couriers reported fair business even though their clientele was under lockdown.

Dwayne Senior, one of Montego Bay’s famous pan chicken vendors, said that ENDS breathed new life into his business, which is now listed on the e-commerce web portal as Sugar Jerk.

“The ENDS is the best thing since COVID. It gives a small business owner a chance to survive despite the lockdown under the pandemic,” Senior said while briskly packaging a customer’s orders for delivery.

Loraine Shaw, whose pan chicken business is listed on the e-commerce platform as Apple’s Jerk, said that she was overwhelmed with orders from faraway distances - even out of parish - which she could not fill.

“I am getting calls from all over, some from people in Negril ... Some people heard about it in Ocho Rios and are calling, so if I could deliver all over, I would do it,” she said.

“It is working and I am happy for that.”

Nakieta Gordon, who ordered jerk chicken and had it delivered to her home in Bogue Village, said that the food reached her on time.

“The service was OK. It came really quick and the meal is still warm,” Gordon said.

While the order came from chef Senior at Sugar Jerk, Gordon said she had no personal experience purchasing from these pan chicken vendors before but was quite comfortable in placing her order some time after Saturday’s curfew started at noon.

Denise Archer, manager at Errand Express delivery service, said that they were able to transport food to customers warm and within a 10-to-15-minute window.

She said the company provides service with a fleet of eight motorbikes and a car, making deliveries from KFC, Burger King, and supermarkets. Errands’ pickup service includes pharmaceuticals.

Delivery, she said, can cost a high of $750 to go to Rose Hall or Unity Hall while transit within the perimeters of the city such as Catherine Hall and Bogue Village draws fees of $650.

A spokesperson for the ENDS pilot programme in St James, Councillor Dwight Crawford, said the initiative was a boon for entrepreneurs in the fast-food business and that the subscription from players in the gastronomy industry was inspiring.

“A lot of persons are signing on and are feeling very good about it,” Crawford said. “We have over 30 businesses who are registered with a workforce of over 300 persons who wouldn’t have been working right now.”