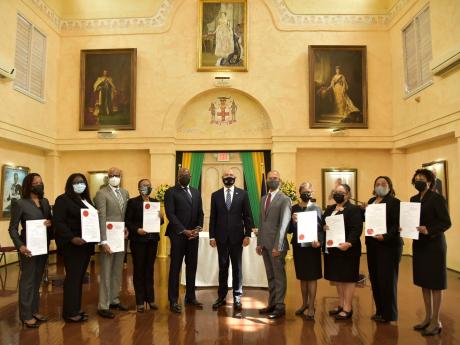 Eight members of the judiciary were sworn in to higher positions today by Governor General, Sir Patrick Allen, during a ceremony at King’s House.

They are Marsha Dunbar Green, Evon Brown, and Cresencia Brown Beckford who were appointed to act as judges of the Court of Appeal for the Easter Term.

Their appointments become effective on April 7.

Carla Thomas and Heather Carnegie were also sworn in as acting Masters-in-Chambers.

Thomas’s appointment becomes effective on May 3, while Carnegie will take on her role on April 7.

The Governor-General commended the new appointees for their commitment to nation-building and wished them continued success.

“The appointment to higher positions of each one of you reaffirms a couple of things – your competence in service, your commitment to nation-building through work, and the understanding that the tasks assigned to you are not easy.

“Your position, today, is the result of years of study followed by years of experience infused, of course, with your aptitude and attitude, your passion for precision and careful analysis of the principles of law, which underpin a just and safe society,” he said.

Allen urged Jamaicans to support the country’s judicial system “as it continues to serve our people in receiving justice”.

“The Jamaican judiciary is the foundation of our democratic processes and it continues to be secured by individuals whose dedication to preserving the rule of law is fundamental to its integrity,” he added.

President of the Court of Appeal, Justice Patrick Brooks, in extending congratulations to the appointees, noted that he has worked directly with several of them and “they possess a wealth of potential, dedication and drive to help to achieve the vision of the judiciary”.

“It is our hope, indeed, our expectation that they will not view this achievement in their respective careers as the final accomplishment but as an opportunity to provide greater service to the judiciary and the country,” he said.

Chief Justice Bryan Sykes, in his remarks, said he looked forward to the continuation of excellent work from the judges.

“With that zeal and commitment, we know that our judiciary will continue its onward march to becoming the best in the Caribbean in… two and a half years and one of the best globally in six years, both qualitatively and quantitatively,” he said.

Justice Dunbar Green, who responded on behalf of her colleagues, expressed appreciation for the confidence placed in them to effectively execute their respective duties in dispensing justice.