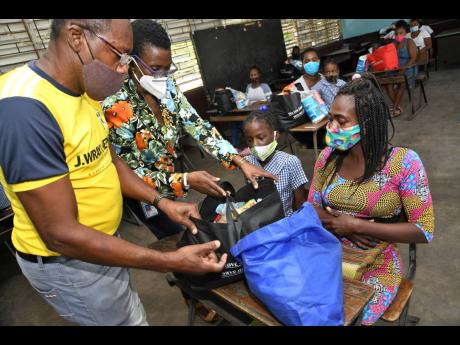 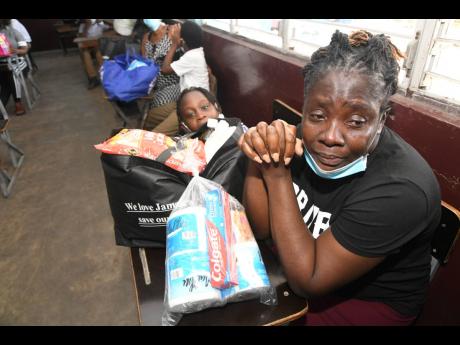 File
Francene Kelly (right), caregiver of Samara Davy (left), could not hold back the tears after expressing gratitude for the care package she received from past students of the Elletson Primary and Infant School in Kingston. Care packages were given to needy students and their families at a ceremony at the institution in March.
1
2

Ten students of Elletson Road Primary School in Kingston were gifted with supermarket vouchers valued at $5,000 each, ahead of the Easter weekend lockdown.

Of the students, five are assigned to the special education unit on the compound, run by the Randolph Lopez School of Hope.

The donors were moved by a story published in The Gleaner on March 22, ‘Hungry children can’t learn’, which unveiled the realities of students in the online environment.

Oswald White is a single father of twins, who are grade five students at the institution. Their mother died from kidney failure before the children celebrated their first birthday.

“I’m in the construction field and COVID has caused things to go slow. It has affected us very badly,” said White.

The father said the pandemic has taught him how to manage scarce resources even as he tries to make health a priority.

“This voucher means a lot. It can go a very far way in terms of getting a few items together. We are in need of some basic items, so give thanks to the organisation that recognised that there are folks like us who need it,” he remarked.

White, who was accompanied by daughter Amoya, one half of the twin, said he was heading straight to the supermarket.

In addition to basic food items, bun, cheese and orange juice are special items that he intends to purchase. The father has made countless sacrifices and taken risks to ensure that food is on the table.

“The children know that things are difficult but they still need their meals. At times I run a little illegal taxi, I’m always in the streets trying to make ends meet,” White said.

He is most grateful for the charity that has been extended to his children since the onset of the pandemic. They were given tablets last year and are engaged in online classes as they prepare to sit the Primary Exit Profile (PEP) next year.

One of the donors, who asked not to be named, told The Gleaner that the unregistered charity had its genesis about two weeks ago.

She said they had gathered food items and monetary donations, but had a challenge sourcing recipients.

“We were reaching out to entities and then we saw this story and said we would start here if they are not already overwhelmed with gifts,” she recalled.

She said the small group of donors opted to give vouchers instead of food packages, as the needs of recipients differ.

“The beauty of the vouchers is that people can get what they need at the supermarket. They can choose to get more vegetables, fruits or tin items,” she said.

The donor added that their small group has been a conduit for family members and friends who have suffered some financial fallout from the pandemic, but still feel that they have the wherewithal to give.