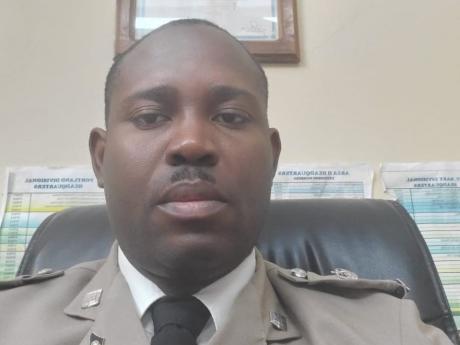 Head of the Trelawny Police, Superintendent Carlos Russell. He said that a strategic action plan has been devised for the parish, which sees the police working closely with communities to cauterise incidents - Contributed photo.

Head of the Trelawny Police, Superintendent Carlos Russell, says tackling domestic disputes and threats is a high priority for the police.

In an interview with JIS News, Russell said that a strategic action plan has been devised for the parish, which sees the police working closely with communities to cauterise such incidents.

“We already have our Community Safety and Security team doing a lot of work in the community. One of the things that [I] have mandated all my station commanders to do is to do regular walk-throughs in the various communities in their districts to meet with the community [members], speak with them and get to know them. Telephone numbers can also be shared with them,” he noted.

Russell informed that on average, the police receive between 30 and 35 reports of threats weekly.

He further stated that all disputes that come to the attention of the police are dealt with promptly.

“We have a book at each station that deals with threats and domestic disputes and based on what is recorded, there are follow-up activities that officers do on a daily basis and we follow through until they are resolved,” he said.

He noted that the police also partners with the church and other State agencies, where necessary, to encourage the process of dialogue and reconciliation.

Russell pointed out that some conflicts can be easily resolved but noted that often “most persons don’t know how to deal with issues of dispute and tend to resort to violence easily. They’re not able to reason out their differences and believe that violence is the answer to deal with their problems”.

“This is an issue and we are trying our best to educate the citizens in our parish to say that ‘look, violence is not the way. It is best to reason it out and not fight it out’, and we are out there in the community bringing across this message to our people,” he noted.

Meanwhile, Russell is calling for residents to work with the police in the fight against crime and violence in the parish.

“What we are asking of them is to work with us to pass on the information, to tell us whatever it is that they know so that we can make their communities a better and safer place for them,” he said.