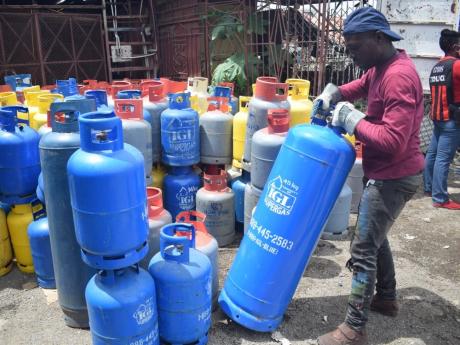 Assistant Superintendent of Police Victor Barrett of C-TOC told The Gleaner that the operator was selling cooking gas without authorisation and flouted safety standards in the storage of cylinders.

The operator of an illegal cooking gas site in Portmore, St Catherine will be charged with several offences in the wake of a raid by law enforcement personnel, the police have said.

The Counter Terrorism and Organised Crime Investigation Branch (C-TOC) of the Jamaica Constabulary Force busted the establishment on Hellshire Road.

It was operating as an illegal cooking gas refilling and distribution centre.

Assistant Superintendent of Police Victor Barrett of C-TOC told The Gleaner that the operator was selling cooking gas without authorisation and flouted safety standards in the storage of cylinders.

"We also discovered some seals, which indicate to us that he is doing refilling operation here as well, so he refills the cylinders and then seals them with these blue seals," Barrett disclosed.

Barrett said that quality control and safety protocols were absent at the site, as gas cylinders were being stored in the sun. He said unsuspecting consumers might have been put at risk.

Peter Graham, chief executive officer of Industrial Gases Limited, one of the largest suppliers of liquefied petroleum gas, declined to comment on the scale of rogue operations in Jamaica.

Both officials told The Gleaner that the instant investigation was fluid and that they would address the matter at a later date.

Winsome Callum, director of communications at the Jamaica Public Service Company, confirmed that a business operator was arrested and charged for the illegal abstraction of electricity arising from the raid at # 2 Hellshire main road.

Callum estimated that 2,000 illegal connections to businesses and houses islandwide were draining the power supplier's profitability.

In 2016, four persons were killed and one injured in a fiery explosion at an illegal cooking gas refilling and supply operation on Jacques Road in eastern Kingston.

Referencing that incident, Barrett urged customers to be careful about where they purchase gas cylinders.

"I just want to appeal to citizens who are purchasing cooking gas to do so at trusted outlets," he said.