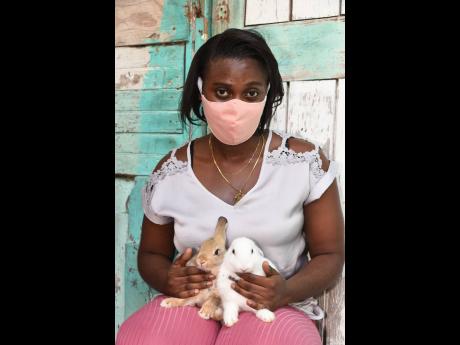 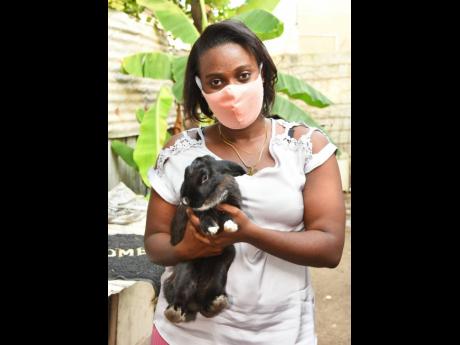 Contributed
Inner-city entrepreneur, Gewana Reid, with one of the rabbits she rears and sells in Denham Town, Kingston.
1
2

Gewana Reid’s goal as a teenager was to acquire a bachelor’s degree in business administration, which would launch her career.

Although the 25-year-old inner-city entrepreneur passed Caribbean Secondary Education Certificate (CSEC) subjects, which qualified her to begin the programme at the University of Technology some years ago, that dream was short-lived.

In addition to this, she became a mother to two children, now aged four and two years. Coupled with this, the father of her children was incarcerated, which forced her to think creatively as to how she could care for herself and her children.

Reid said she eventually decided to go into the business of selling rabbits.

“It all started in 2019 when the father of my children was incarcerated and I was left to be the sole breadwinner for myself and my two children, so I thought about selling rabbits. I did some research. Back in high school, I had a pair of rabbits, and I know that they breed easily, so what I did was buy a pair. At that time, I did not have anywhere to put them, but I knew that I was going to buy the pair,” she shared.

Reid said that getting her first pair of rabbits for business was not easy, adding that she “walked out” of Coronation Market in downtown Kingston to find a man who sold rabbits and made arrangements to purchase them, the cost of which she could not pay in full at the time.

“For the size that I got, the money wasn’t enough because his rabbits were bigger. They were two months old already, so I got away with the price,” she said.

Reid added that the seller bargained with her to put an additional $1,000 on what she had already paid before she collected the pair.

“The following week, I gave him the money, and when I went home, I put them [the rabbits] under a bucket because I had no where to put them,” she said.

Reid pointed out that her mother had a chicken coop, which she planned to take over to rear her rabbits.

“She had about 30 chickens, and I said to myself, ‘I am waiting for her to kill the chickens to put the rabbits in’. Once she killed the chickens on the weekend, I put the rabbits in shortly after and she screamed out ‘No! No! No! You can’t take my coop’, but I knew she would not put the rabbits out, so I let them stay there until she eventually gave me the pen, and that is how it started,” she said.

Reid revealed that she conducted research about rabbits and started buying different breeds based on customers’ needs.

Her market includes children who want rabbits as pets.

In December 2020, Reid was one of eight entrepreneurs in Denham Town, Kingston, who received a grant, equipment, and a scale from the Enterprise Development Project implemented by the Jamaica Social Investment Fund (JSIF) under the Integrated Community Development Project (ICDP), Phase 2.

She gives thanks, especially for a scale and bowls for feeding, which the JSIF donated, because it has improved the standard of raising her rabbits.

“I was using bottles [to feed them]. I would cut the oil jug or the syrup jug and use it for the water, but the rabbit would nibble on these … so they gave me some ceramic bowls for feeding,” Reid said.

“I have customers now with the assistance from JSIF. I was introduced to different persons, and I got highlighted, so people reached out to me. I try to keep the customer base and interact with them,” she added.

Reid intends to go into the market that provides rabbit meat to be cooked and sold, but after the COVID-19 pandemic ends.

“I intend to, but currently, there is no market for it because the persons that would really buy it are the hotels … but just because of the pandemic, I don’t get into any,” she said.

Reid, who has a certificate in paralegal studies, hopes she will be able to return to university one day and complete her degree.

“One day, I will return, even if it is when my children are going. I will go with them,” she said.