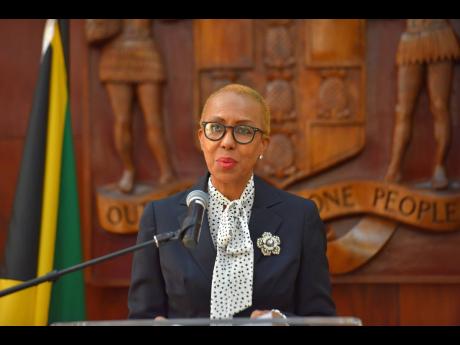 Education Minister Fayval Williams says that 25 per cent of Jamaica's students are not attending school consistently or at all owing to illness or lack of interest.

At the same time, teachers are only conducting classroom management and engaging their students for approximately three out of five days per week.

Williams, who was addressing the Jamaica Teachers' Association's (JTA) annual conference, which was hosted on an online platform on Wednesday, said that students who had a lower attendance rate than was considered acceptable, would be affected in their external examinations.

"School attendance across the education sector is not as high as it should be, standing at 74.2 per cent. That means a good 25 per cent of our students are absent any time you walk into the schools," said Williams. "We know that daily attendance is closely correlated to school achievement, so students who attend school, where the daily attendance is relatively low, they will underperform in CSEC [Caribbean Secondary Education Certificate] exams."

Giving further details, Williams said that 38.5 per cent of poverty-stricken students failed to attend school because of illness, while 32 per cent of students in 2017 expressed a lack of interest in attending school.

"When you look at the poorest segment of our society, 38.5 per cent of students are not attending school because they are ill, and the most common illness among our children is asthma. Also, some students make a conscious decision to stop attending school, and in 2010, 19 per cent of them who stopped attending said it was because of no interest, while by 2017, that had risen to 32 per cent," Williams told the teachers participating in the conference.

"This is alarming when our students are saying they have no interest in school. It means that they are not seeing anything in school for them, and we as an education sector will have to jump on that in whatever way we can."

Williams also pointed to information from the World Bank, which suggests that teachers only spend one day's worth of classroom time directly engaging their students.

"Data from the World Bank shows that teachers in Jamaica spend the equivalent of two out of five days per week in classroom management, and of the remaining three days, the entire class is engaged for only the equivalent of one day. I would like to know what are some of these off-task responsibilities that you have in the classroom that are taking you away from the most important thing that we are asking of you, which should be teaching," said Williams.

The JTA's two-day conference was held this year under the theme 'Reimagining education: Effective practices in the digital age.' It featured discussions on how education will be transformed due to the COVID-19 pandemic and how artificial intelligence may revolutionise online learning