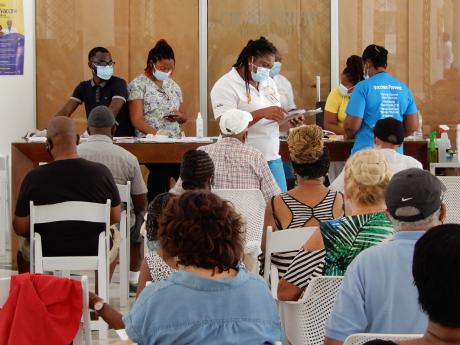 Despite a slow start to today's vaccination blitz in St Ann, there was a huge turnout at the Gran Bahia Principe Hotel in Runaway Bay, in Runaway Bay and at other locations on the North Coast.

The series of mass vaccination exercises, which will continue until Tuesday across the country to vaccinate some 50,000 people against COVID-19, began at three sites in St Ann, Trelawny and St James on Saturday, and will expand to two sites in Savanna-la-Mar, Westmoreland tomorrow.

At Bahia, a large turnout early this morning saw chairman of the North East Regional Health Authority (NERHA) Laura Heron predicting that the 1,000-target would be met and could be exceeded. She said the figure could reach 1,500 at the end of the day.

The turnout included mostly the elderly, but also several workers employed to the hotel.

Tufton, while praising NERHA for its organisation of the event, said rain, among other factors caused a slow start in some instances.

“I want to give a lot of thanks to the organisers NERHA; for the most part I think persons are happy with what is happening and I am certainly pleased with what I am seeing,” Tufton said.

He continued: “For the rest of the country we are going fairly well, but to a relatively slow start in the early morning for a number of reasons; a couple of parishes where there has been rain, in some instances persons came without appointments and so you had a rush in the early morning, so we had to adjust a bit to settle things down. But I believe that as you go throughout the day it will become normalised and we will, hopefully, achieve the target that we’ve set for ourselves, but so far so good.”