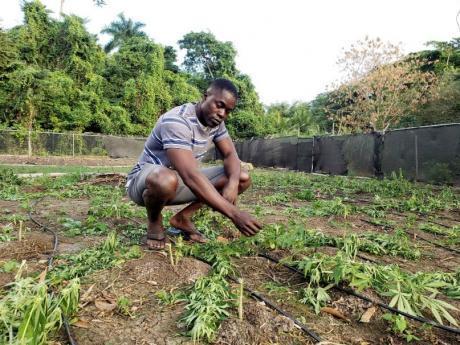 A St Thomas farmer who has accused the police of wrongfully destroying his ganja field comprising 806 plants, is to return to court on May 12.

He was offered $150,000 bail when he appeared in the St Thomas Parish Court on Thursday.

The 45-year-old Rastafarian, Royan Harris, who sports a low-cut hairstyle, was offered bail by Parish Judge Sanchia Burrell on charges of illegal possession of ganja, dealing in ganja and cultivating ganja following a successful bail application by his lawyer, Samoi Campbell.

Bail was granted on condition that he surrender his travel documents with a stop order in place at all ports. He is also to report to the Morant Bay Police Station on Mondays, Wednesdays and Saturdays.

His bail had been previously revoked, when he appeared in court on March 12.

Harris was arrested and charged after police officers, who were armed with a search warrant, swooped down on his house in Dumfries in the parish on February 18 and discovered the ganja field with the ganja plants. They were subsequently destroyed.

But Harris, who has since accused the police of being malicious, claimed he was growing the herb for sacramental use by members of the Ethiopian African Black International Congress  (EABIC), a Rastafarian group.

According to the accused, he was legally cultivating ganja on behalf of the organisation, based on the amendment to the Dangerous Drugs Act in 2015, which allows members of the Rastafarian faith to cultivate marijuana on designated lands.

A priest from the EABIC had confirmed that the group had been using the accused’s property to grow the ganja for religious purposes.