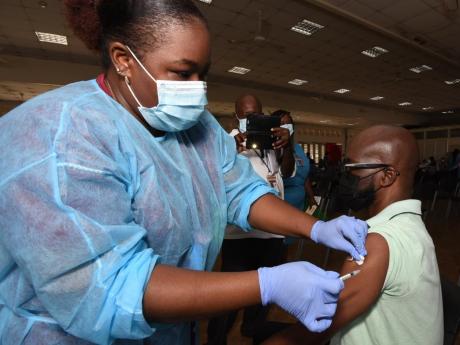 Health officials in St. Catherine said they are pleased with the public response to the mass vaccination exercises that took place at two locations in the parish on the weekend.

At the Portmore Heart Academy and the Spanish Town Health Centre today,  hundreds of people, most of whom had registered online prior to arriving, and several others who walked in to the venues, sat under tents waiting to receive their first dose of the Oxford-AstraZeneca vaccine.

Senior public health nurse for St Catherine, Marlene Stephenson, told The Gleaner that the response was overwhelming in Portmore, with just above 850 people turning out for their first shot.

"We are getting a lot of walk-ins in the 40 to 50 age group and we are expecting this number to increase, the response of the teachers is great. We have not seen a lot of taxi or minibus drivers turning up for the vaccine, but at the same time there is hardly any hesitation on the part of the ones who showed up," she said, adding that she believes the success so far has been because the message is being accepted; and people who have received their does of the vaccine are sharing their experiences with others.

Fifty year-old Annmarie Johnson, a Portmore resident who walked into the Portmore HEART Academy said, she had no challenges receiving her first shot, even though she had not pre-registered.

Retired principal of the Tivoli Gardens High School in Kingston, Aldrick Durrant, said he wanted to be on the safe side, when he turned up for his vaccination.

"Based on what is happening I have seen more evidence in support of the vaccine than that which is against it, I am here to make sure I get my first shot," he declared.

Member of Parliament for South East St Catherine Robert Miller, who spent the weekend mobilising constituents, said there were some persons who refused to take the vaccine, and others opted to want to wait and see, but he said most have opted to be immunised against COVID-19, noting that the response has been overwhelming.

It was a similar situation in the St. Catherine capital, Spanish Town, where more than 500 people were vaccinated on Saturday up to 1:30 p.m., and more than 300 today.

People's National Party caretaker for East Central St. Catherine, Raymond Pryce, said initially he had reservations about taking the COVID-19 vaccine, but said those concerns subsided when he showed up at the Spanish Town Health Centre.

"The thing about this vaccine is the time it takes to develop - shorter than what we are accustomed to, but so is the advancement in science and technology, as well as medicine; notwithstanding, we are all humans and if something is going to be introduced into our systems there will be concerns," he noted.

Correctional officer, Kemar Evans, who falls within the 40 to 50 age group, said there should be no reservation in taking the vaccine.

"This step for me as a civil servant is to show my colleagues that the risk is lower than it seemed, it is better to get it than not to get it," he told The Gleaner.

Enid Bennett High School teacher, Michelle Lee, was also upbeat about getting vaccinated, saying she will definitely recommend the process.

Meanwhile, St Catherine public health doctor, Joseph Kelly, who was monitoring the process said persons who had been vaccinated were perfectly fine, especially the elderly. He said the only problem encountered persons noted was tenderness to the area where they were injected.