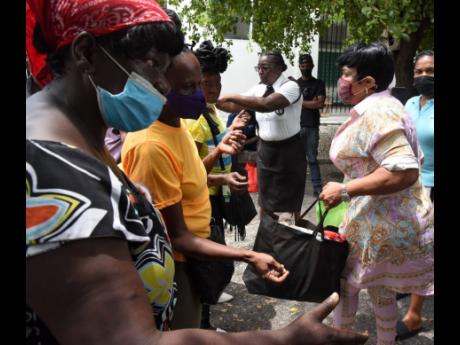 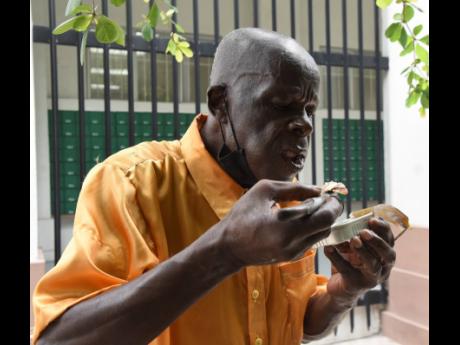 Ian Allen
Oliver Abel digs into a can of sardine shortly after he collected a care package from Lloydene Alexander from the Little Miss Foundation on Thursday, April 8. Miss Alexander and her foundation distributed over 70 care packages to the homeless on King Street in the vicinity of the appeal court.
1
2

Tall and well dressed, 76-year-old Oliver Able stood out among the group of homeless people gathered near the appeal court in Justice Square, downtown Kingston, to receive care packages from the Little Miss Foundation, last Wednesday. That, however, was not the reason he caught the eye.

Having taken a can of sardine from his package and peeling it open, Abel proceeded to spoon the seafood into his mouth, using a ratchet knife and then draining the contents.

“I was really hungry, man,” he told The Gleaner, his American accent quite incongruous with the environment.

“Yesterday.” was his answer, when asked when last he had eaten, and this was around 1:00 o’clock in the afternoon.

As we chatted, his mistrust eased a little and he was more relaxed. “I’m going to eat later, man, not now. Keep the hunger away, brother. You got to eat to live,” Able said, when asked about his immediate plans.

His command of English hinted that he had at some point enjoyed finer things in life, and as I pressed him about his past, he became cagey, telling me, “I am good, man,” this declaration underlined by hearty laughter.

The laugher continued when I asked for a share of the goodies in the bag. “I’m a mean person,” he said, without a hint of malice, maintaining his cryptic behaviour the more I pressed. Eventually, he relented and disclosed that he had been in and out of Jamaica for some time, the last five years as one of Jamaica’s estimated 2,000 homeless people, some 700 of whom spend their time on the streets of the greater Kingston area.

“I’m good, man,” he assured me. “I don’t have to lie about nutten, I just fall on hard times. I was in America working and I didn’t have a green card, and they caught up with me.”

Despite being deported and now far removed from some of the luxuries he once enjoyed up north, still has fond memories of those good old days.

“I used to own my home in America, got my family there and everything,” he shared. “I fall on a little hard time, but I will bounce back. That’s the way life is brother, you don’t know what tomorrow might bring. You hear me sah?”

Abel used to keep in touch with friends and relatives in the United States, until he lost a bag which contained the notebook with all their telephone numbers and other contact information. Strikingly dignified in his appearance and utterances, he admitted to taking refuge in the Marie Atkins Night Shelter on Hanover Street, downtown Kingston, “now and then”. Reaching into his wallet, he fished out an voter identification card, also called the national identification card, as if seeking to assure me that he was. at least to some extent, still in charge of his own destiny.

Last Wednesday he was benefiting from the kindness of Lloydene Alexander and her team from the Little Miss Foundation, who were building on a initiative to ease the plight of some of the Corporate Area’s growing homeless population. Alexander says 84 care packages were given out, but even as we chatted, she was being cussed out by some who arrived after all the goodies were gone.

Earlier, they had distributed some 300 packages along sections of Church, Duke, Laws and Hanover streets, so Wednesday’s charitable display was an effort to balance the scales.

“The last time, King Street people didn’t get anything because they didn’t know I was here. So I planned to give out 50 packages over here and take the others over to Church Street,” Alexander explained as a number of persons milled about, enquiring about their packages. Having visited the area in the evenings, she believed that the 50 packages would have been more than enough, based on her head count, but ended up giving out 84, and still it wasn’t nearly enough.

Moved by the many expressions of gratitude from these homeless persons, Alexander is even more committed to continue making a difference in their lives. Anyone interested in partnering with her on this charitable initiative, may call 876-350-6064.