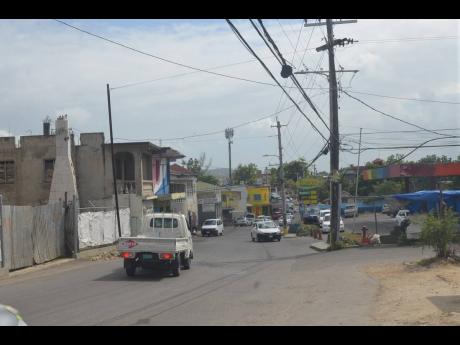 File
A file photo of a section of the main square in Mt Salem, St James.

There was a war of words at last Thursday’s monthly sitting of the St James Municipal Corporation as several councillors accused their Mt Salem division counterpart, Kerry Thomas, of ingratitude as it relates to the effectiveness of the zone of special operations (ZOSO) in Mt Salem.

In the meeting, which was streamed online, Thomas claimed that the Mt Salem ZOSO, which was originally declared in September 2017 by Prime Minister Andrew Holness, has been insufficient to curb criminal activity in the division as three murders have been committed there in the past five months.

“While the ZOSO has done some good, I am still very concerned about the fact that over the last four to five months we have had three gun murders within the zone. I have had dialogue with the zone commanders and the people there, but the mindset has not been impacted, and we have not achieved the mental change that we expect for a community to heal through the ZOSO,” Thomas told the meeting.

Thomas’ assertion did not sit well with Councillor David Brown of the Montego Bay West division, who accused the Mt Salem councillor of hypocrisy and ungratefulness.

“I have sat in this chamber before and heard Councillor Thomas praise the ZOSO and the social framework that has diametrically shifted that community to a better trajectory. To come here and see a councillor who has benefited more than any other councillor, juxtaposing the police on one side and citizens on the other side, that does not make any sense … he is very ungrateful,” said Brown.

Councillor Mark McGann of the Somerton division, said that Thomas’ utterances created confusion as to whether he was condemning the ZOSO or the murders in his division.

However, Thomas was unrelenting as he argued about his right to outline any perceived problems in the ZOSO.

“With three murders and other things that are happening in the zone, do not tell me that I should not speak about it; and do not tell me that if I identify a problem in there, I am ungrateful. We have to call a spade a spade, because it is unacceptable, and what we want is zero murders in the ZOSO,” said Thomas.

The ZOSO in Mt Salem was the first such initiative launched in Jamaica in response to the nation’s problematic wave of crime and violence.