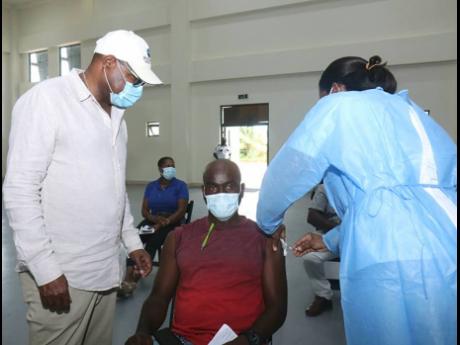 Ashley Anguin/Photographer
Edmund Bartlett, tourism minister, watches as Lans Patrick, a tourism worker, is administered his first dose of the Oxford-AstraZeneca by Shamar Birthfield at the Montego Bay Convention Centre on Saturday.

The fear of being among the COVID-19 statistics drove scores of tourism workers to the weekend vaccine blitz that was flocked by residents across northern and western Jamaica.

“I have seen the damage COVID has done in and around the world and right here where I live in Montego Bay. Many have passed,” Sixt-Rent-A-Car operator Nadine Spence told The Gleaner at the Montego Bay Convention Centre on Saturday.

Openly expressing her anxiety, the businesswoman, who also wears the hat of area chapter chair of the Jamaica Hotel and Tourist Association (JHTA), revealed that it has been difficult convincing some of her staff to take the jab because they lacked information on vaccine safety and side effects.

Spence said she has had to educate her staff on why they needed to take the vaccine. The negative publicity shrouding the Oxford-AstraZeneca vaccine has caused a stop-start roll0out across Europe amid concerns over blood clots in a minuscule number of cases. Those stumbles have continued to haunt the manufacturers of AstraZeneca and provide ready fuel for the anti-vaxxer movement.

Spence’s comments were supported by Andre Hudson, who was one of the first in line to take the jab. He believes that more of his colleagues will turn out when an awareness campaign targets them directly.

“Proper education is what tourism workers need, information on the side effects, etc. They really need to be educated on the real benefits of the being vaccinated, so an awareness campaign targeted towards them should be within the hotels,” he told The Gleaner.

Robin Russell, general manager at Deja Resort, Montego Bay, blames the bad publicity vaccines such as the Oxford-AstraZeneca have received worldwide for the significant levels of reluctance here. He himself was hesitant in the early days, adopting a wait-and-see attitude.

“But after seeing that millions have taken the vaccine without adverse reaction, knew that when my time came, it would be my time,” said the hotelier, who added that he has already convinced 36 per cent of the 86 people employed to his hotel to get immunised. He estimates that number to double by this week.

“When 60 million people take a vaccine, with only two or 3,000 people having an adverse reaction, which we are not even sure the vaccine caused, that is a plus,” argued Russell.

He said it was crucial for the industry to vaccinate staff.

“If our staff get sick, it will further impact the industry,” he concluded.

Spence, Hudson, and Russell are among the thousands of members who make up the sector, which has been savaged by the pandemic, causing jobs to haemorrhage and bookings to evaporate.

They all agreed with JHTA President Clifton Reader, who said that with the 50 million people fully vaccinated in the US and 160 million on their first dose, immunisation was the road to recovery for the industry.

The United States remains Jamaica’s most important source market of visitors, and Reader said the island should take full advantage of the benefits that accrue from geographical proximity.