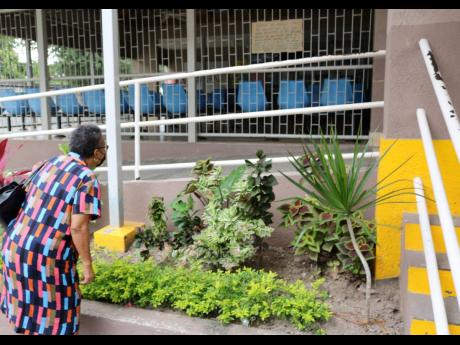 Christopher Serju
A senior citizen tries to read the hand written sign at the Edna Manley Health Centre in Grants Pen, St. Andrew advising of the shifting of the vaccination centre to the National Arena. She was one of the many persons who received an email confirming the time and place of the vaccination only to find the place shuttered. 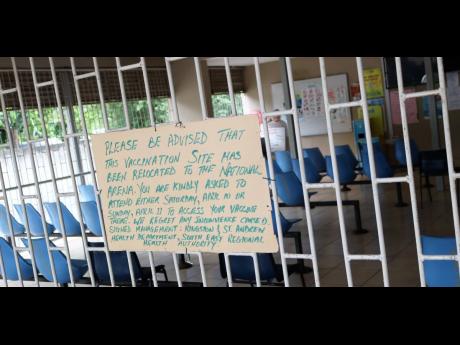 Christopher Serju
A close-up of the handwritten sign posted on the grill of the Edna Manley Health Centre at Grants Pen, advising those who turned up for COVID-19 vaccinations on Saturday, April 10, that the venue had been moved to the National Arena.
1
2

Director of special projects at the Bureau of Standards Jamaica, Gladstone Rose, was among the persons who were disappointed last Saturday when they turned up at the Edna Manley Health Centre in Grants Pen, St Andrew, to get their COVID-19 vaccination, only to find the place shuttered and no one around.

Upon further checks, two handwritten placards were seen, one on the door and another on a window, advising that the vaccinations had been deferred to the National Area. There was no one around to answer questions, which infuriated Rose.

“We were told we should come to the Edna Manley Health Centre according to the email that we got when we registered, and nothing has come since to say that it has changed, except that now that we are here seeing a written note that says the vaccination site has been relocated. It would be good if someone had told us before just by the same methodology that we were told to come here. So we wouldn’t have wasted the time because we set our plans to come on time and now we have to leave and go to the arena. We don’t know what the traffic situation be and we could be late now because they say we should come 15 minutes before.”

Rose, who has a broken ankle encased in cast and uses two crutches to get around, as well as family members who drove him to the appointment, were particularly peeved at the let-down.

“We registered online and got the notification online to come here. It would be nice to be just informed that it had changed, rather than we come here,” he vented.

The placards directed persons with vaccination appointments for Saturday and Sunday, April 9 and 10 to go to the National Arena, instead. But it was obvious that the news had not been circulated via the channels through which the appointments had been confirmed. Throughout the day a lot of senior citizens turned up and were at a loss since there was no one on-hand to advise of the change, and some had difficulty reading the placards from the distance it was placed.

When The Gleaner returned an hour later, we encountered Sasha who explained that her successful online application had been overturned.

“Thursday I got a text and email saying that the appointment was cancelled due to unforeseen circumstances and I am to reschedule. So that’s what I did and got a confirmation for here today. So I guess I will be going to the arena.”

One senior citizen who got out of the car ahead of her husband had difficulty reading the placard because of the distance and when she was advised of the new arrangement, her husband insisted that they leave in a hurry and head for the arena.

"Due to the fluidity of the vaccination process, there was a delay in communicating to the persons who signed up for appointments at the Edna Manley Health Centre. These persons were asked to come to the National Arena to be vaccinated," she said. "We apologise for this."