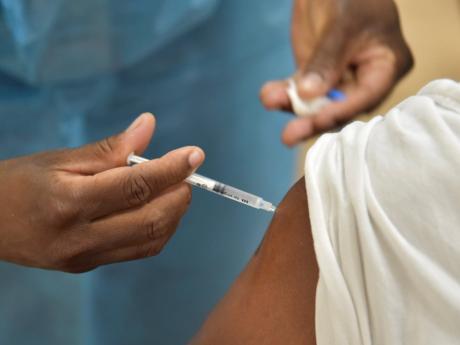 A nurse administering the AstraZeneca coronavirus vaccine to a member of the public at the vaccination blitz at the Portmore HEART Academy on April 10, 2021 – Contributed photo.

Director of Family Health Services at the Ministry of Health and Wellness, Dr Melody Ennis, is assuring the public that the COVID-19 vaccine does not impair or impede the body’s immune system to fight other illnesses.

Speaking in an interview with JIS News, Ennis explained that the vaccine operates to generate antibodies that are specific to a particular disease entity.

“It does not affect the body’s ability to respond to other viruses or bacteria, so if I am vaccinated, for example, against measles, my antibodies will fight against measles. But the rest of my ammunition is still functional to help me to fight against the common cold, or chicken pox for example, so vaccines don’t really impair or impede your other functions,” she explained.

Ennis, in highlighting the ingredients of the vaccine, said that these include the adenoviral vector, which is an adenovirus.

“This is a virus that causes infection in some animals. It does not affect humans at all. This adenovirus causes flu-like illness. It is purified and basically cored out and forms an inert shell, which acts as the transporter into one’s body,” she informed.

She added: “The other components include the genetic material of the spike protein. This is made safe and compatible with getting into the body with the infusion of salts – magnesium, some synthetic proteins, histidine, some alcohol-ethanol, sucrose, and water for injection.”

For persons who are concerned about infertility being a side effect of the vaccine, Ennis assured that “there is nothing in the makeup of the vaccine, in the ingredients at all, that could in any way affect one’s ability to reproduce”.

The family health director also pointed out that there is no evidence to suggest that vaccines in the past have caused infertility.

She noted that, in fact, there are persons who were involved in the phases one and two vaccine trials who have since become pregnant.

Ennis cited the example of the human papillomavirus (HPV) vaccine, which persons had suggested could cause infertility in the girls to whom it was administered, pointing out that many of those girls are now women who are pregnant and having children.