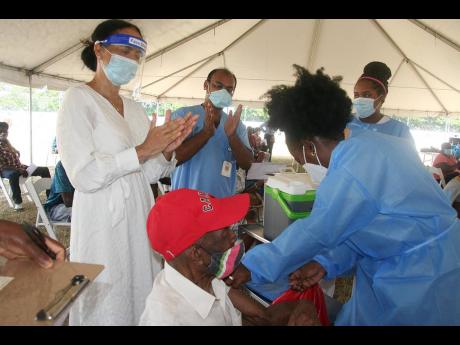 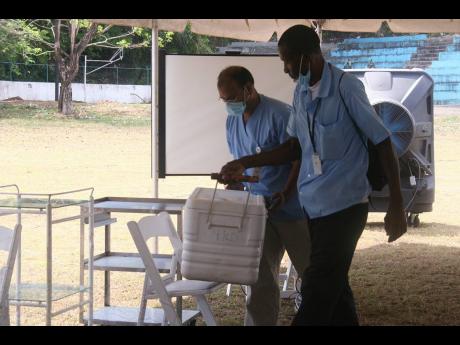 Photo by Bryan Miller
Hanover Medical Officer of Health Dr Kaushal Singh (left) being assisted by a Hanover Health Department worker to carry in the igloo with the vaccines.
1
2

Several Hanover residents who responded to calls to take their first of two COVID-19 jabs at the Orchard Sports Complex in Hopewell yesterday were disappointed when at the 9 a.m. appointed time, the vaccines and many of the healthcare workers were still not present.

Apart from some tents mounted in the playing field, the logistical arrangements were in disarray as there was also no provision to determine the order in which those seeking to get vaccinated would get their jab.

Yesterday’s exercise was an initiative of the American Friends of Jamaica (AFJ), which is headquartered in New York in the United States, which is partnering with the Government in its vaccination efforts.

AFJ Executive Director Caron Chung told The Gleaner that she was unaware that the Hopewell Health Centre had cancelled its vaccination programme for Monday and had informed all its patients with appointments to attend the AFJ clinic for jabs.

Yesterday’s effort was intended to be a soft introduction ahead of the the official blitz from April 16 to 20.

She added that the AFJ effort was intended to support – and not divert persons from – the vaccination blitz being carried out at the government-run clinics across the parish.

“We see an opportunity now during this pandemic to help Jamaica get back to health and to get over this crisis by establishing a blitz site to inoculate citizens against the COVID-19 virus,” said Chung, pointing out that the AFJ, whose board is made up entirely of former US ambassadors to Jamaica, has been around for more than 40 years, funding various programmes across Jamaica.

She said that the AFJ was kick-starting its vaccination efforts in Hanover as the donor who provided seed funding specifically requested that it begin in the western parish.

“We are starting today, Monday, April 12, and tomorrow, April 13, as a soft introduction. Our overall goal is to have 1,000 persons per day when we continue on April 16th,” added Caron.

Dr Kaushal Singh, medical officer of health for Hanover, told The Gleaner that the delay at the Orchard Sports Complex was due to unavoidable logistical problems, but he was pleased with the patience of residents.

“It is quite encouraging. A lot of people are here right now. We are expecting a minimum of 400 to 600 people here today,” said Singh, adding that within the first two hours, more than 80 people were inoculated.

Singh said that vaccination was being done simultaneously at health centres in Lucea, Sandy Bay, Ramble, and Green Island.