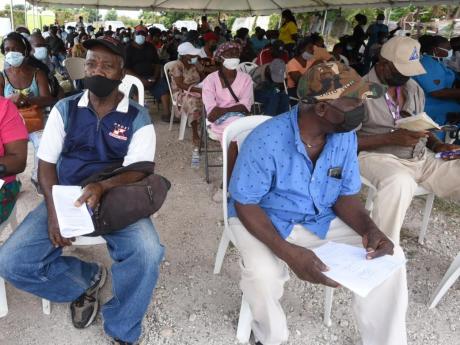 Members of the public at the Old Harbour Civic Center in St Catherine awaiting COVID-19 vaccination on April 13, 2021. Persons gathered at the site from as early as 7:00 a.m. to get the jab - Ian Allen photo.

The climax of the Government's four-day immunisation blitz was hit by supply shortages as several sites spanning across Jamaica ran short on inventory as thousands of Jamaicans swarmed centres on Tuesday.

Persons were being turned away from the National Arena and Mona Ageing and Wellness Centre in St Andrew shortly after 10:00 a.m.

The shortages appeared to be widespread across St Catherine, as persons who turned out at Eltham High School, Linstead Anglican Church, and the Old Harbour Civic Centre said they had been waiting from as early as 7:30 a.m.

Up to 1:00 p.m., persons at Linstead, some as old as 94, said they had been waiting in vain after receiving promises that vials were on the way. 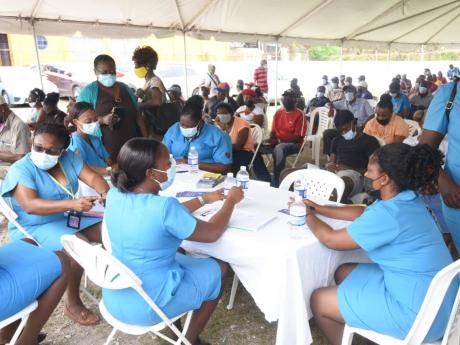 In Photo: Scores of persons at the Linstead Anglican Church in St Catherine awaiting COVID-19 vaccination

Permanent secretary in the Ministry of Health and Wellness, Dunstan Bryan, acknowledged the challenges hobbling immunisation in St Catherine but said new stock was being mobilised.

"We are going from parish to parish, and as soon as the doses are finished, we will close those as well," he added.

Preliminary data show that at least 7,000 doses of vaccine had been administered up to noon today, said Bryan.

Sandals Inn in St James; Manchester High in Manchester; and all locations in Westmoreland had reportedly been closed to vaccination candidates by mid-morning.

Health and Wellness Minister Dr Christopher Tufton said that supplies have been rerouted from the Western Regional Health Authority to Eltham High in Spanish Town and Old Harbour this afternoon.

Scores of people inside and outside Eltham High School in St Catherine are yet to be vaccinated. A security guard has confirmed that as of 11:50 a.m. Tuesday, no one had been inoculated, as health officials are awaiting the arrival of the vials. #GLNRToday pic.twitter.com/zjkPlAwT99

He said vials were scheduled to have arrived from Monday night but were delayed because of logistical problems.

Tufton said that a silver lining of the heavy turnout on Tuesday could be an indicator that vaccine hesitancy may not be as deep-seated as feared.

Jamaica intends to vaccinate 65 per cent of its population by March 2022 to achieve herd immunity against the respiratory disease.

At the Twickenham Park Open Bible Church on the fringes of Spanish Town, senior citizen Stanton Drummond was a picture of satisfaction as he left the vaccination centre.

He had reached the church by 9:00 a.m. and was fully processed and leaving by noon.

Despite the three-hour wait, Drummond was happy with the process after initial concerns.

He said that about 10 o'clock, health personnel announced that there weren't enough vaccines for the crowd.

But those hitches were ironed out with new supplies, he said.

"I am very impressed with the speed once you get inside. I think we in Jamaica are doing very well, as India made the product and half its population is yet to be vaccinated," Drummond said.

He said that more help was needed to fully educate persons on the importance of vaccination.

"I think people are warming to it. I received mine and I am feeling good. I am 74 years old and feel pleased that preparations are being made for us seniors," Drummond added.

Meanwhile, it has emerged that Panadol medication, which is recommended to stave off side effects from the jab, was being rationed by some pharmacies.

"I went to buy six tablets. I was only given two, and the cashier told me it is all she can sell one person. I cannot believe this during a pandemic," one customer said.

- Rasbert Turner contributed to this story