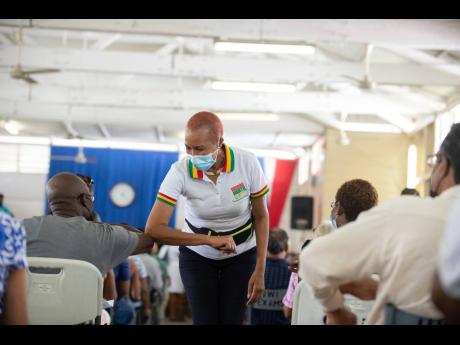 Gabriel said that he has received no reports of concern from school administrators about “time on task”.

He said that beyond actual contact hours, teachers assumed roles and responsibilities that ranged from discipline to mentorship, to providing financial resources and other means of support.

“Teachers are engaged as their school timetables would dictate, and school administrators are charged with the responsibility of supervising this process and acting accordingly where concerns exist,” Gabriel told The Gleaner on Monday.

The union boss was responding to Williams’ remarks during last week’s annual JTA conference, during which she cited World Bank data.

“Teachers in Jamaica spend the equivalent of two out of five days per week in classroom management, and of the remaining three days, the entire class is engaged for only the equivalent of one day,” Williams said, citing the study.

“I would like to know what are some of these off-task responsibilities that you have in the classroom that are taking you away from the most important thing that we are asking of you, which should be teaching.”

But Gabriel said that the data provided by the education minister needed to be clarified.

“We have a very thorough National Education Inspectorate process that is charged with the responsibility of examining schools, and the reports are well documented, so I would suggest that this would be a much better source to glean information from as it relates to teachers’ engagement with students and all other aspects of school management,” said Gabriel.

In a World Bank study published in 2014, Jamaican teachers were found to have spent 11 per cent of total classroom time off-task, or not engaging in teaching or classroom management. Ten per cent of off-task time was equivalent to 20 lost days in a 200-day school year.

However, Jamaica’s NEI inspectorate report for 2017 outlined that 130, or 69 per cent, of 189 schools under examination were ranked as satisfactory and above for teaching in support of students’ learning, including the use of innovative strategies to enhance classroom engagement.