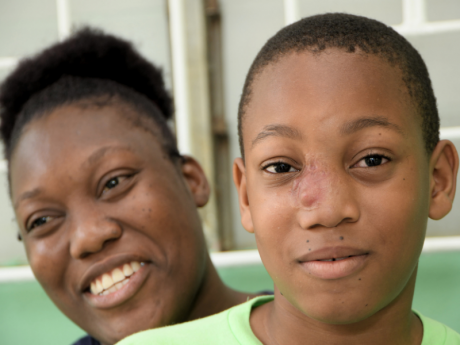 Tears of sorrow from Jabari Osborne and his mother Susan Gordon have been transformed to hope with donations that have now made his life-changing surgery possible.

After just 48 hours, the fundraising goal of US$32,500 has been met for 10-year-old Jabari Osborne’s surgery.

Tears of sorrow from Osborne and his mother Susan Gordon have been transformed to hope with donations that have now made his life-changing surgery possible.

The surgery needs to be done by July.

A GoFundMe account was launched on April 3 for Osborne who was diagnosed with an arteriovenous malformation, which is also known as AVM.

Up to two days ago, only US$600 was donated towards his airfare and doing his surgery at the Vascular Birthmark Institute at the Lenox Hospital in New York.

Like other doctors in Jamaica, the institute’s director, Dr Milton Waner, warned the youngster and his mother that AVM could be fatal if the tangled blood vessels rupture or weakens.

On Wednesday, The Gleaner highlighted the story of Osborne and his mother and their journey towards hope.

READ: Hurt by his mark

The young boy was born with a heart-shaped birthmark on his face which later grew into a lump.

In 2018, he spent two months and two weeks at the Bustamante Hospital for Children for treatment after the area ruptured.

And while the medical team was able to stop the bleeding, they could not permanently fix the problem.

Since that time, the 10-year-old has had to endure bullying from his peers because of the mark on his face, causing him to become withdrawn and angry.

Gordon, who is living with a brain tumour, told The Gleaner that she just wants to make life better for her son.