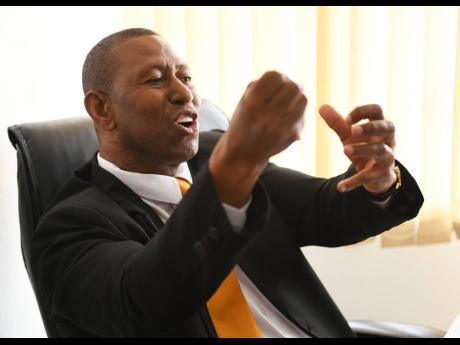 File
Hugh Wildman said he doesn’t know why he hasn’t been elevated to Queen’s Counsel.

Prominent attorney-at-law Hugh Wildman has expressed shock after his application to practise in the Cayman Islands to represent a Jamaican man in the appellate court was rejected.

Wildman says he is dissatisfied with the queries raised by Chief Justice Anthony Smellie, in turning down the application, about whether he had ever applied to be a Queen’s Counsel in Jamaica.

But the appellant, 46-year-old Jamaican Rohan Gidarisingh, a chef, expressed disapproval on Thursday that he cannot get the lawyer of his choice to represent him.

“It is a breach of my constitutional right, and I have written to the chief justice, the governor, and the Commonwealth Office on the matter,” the appellant said.

Gidarisingh, who has Caymanian citizenship, said he sought the assistance of other lawyers and had not been impressed, prompting him to hire Wildman. Gidarisingh was convicted of rape in 2017 and sentenced to 13 years. He said he wants to clear his name because the woman consented.

The chief justice, who is a Jamaican, said in his ruling on Tuesday that he had before him an application for limited admission of Wildman in order to allow him to represent a client before the Court of Appeal for a proposed application to reopen a criminal appeal.

“The primary basis of the application is that Wildman should be regarded, by virtue of long standing at the Bar and experience, as the equivalent of Queen’s Counsel, to meet the policy of Section 4 of the Legal Practitioners’ Act,” the chief justice said.

He said he had only been presented with Wildman’s affidavit in support of the proposition that he be regarded as the equivalent of Queen’s Counsel.

“That is odd, to say the least. The court is entitled to expect objective information against which to asses the merits of such a proposition. For instance, testimonials from seniors such as judges or Queen’s Counsel affirming their belief that Mr Wildman should be regarded in that way.

“The court is entitled to know whether Mr Wildman ever applied for silk. If so, such an application must have been unsuccessful as Mr Wildman has not been appointed, and so, why not?” Chief Justice Smellie said.

Wildman told The Gleaner on Thursday that within the last two years, he has applied twice to be appointed Queen’s Counsel, but so far, he has not received a response from Chief Justice Bryan Sykes, who chairs the committee.

He said the last time he applied was in October last year.

“So I do not have a reason to give if I am not given a reason,” Wildman said in response to Chief Justice Smellie’s query.

Wildman explained that the application presented by the lawyer in the Cayman Islands on his behalf showed a list of his accomplishments as a lawyer for more than 33 years.

Wildman, who has been called to practise at the Bar in the British Virgin Islands and Grenada, said in making an application to practise in another Caribbean country, it was not unusual to put in your affidavit that your work as a senior lawyer was tantamount to a Queen’s Counsel’s.

The attorney said he had also supplied a certificate from the General Legal Council that no order had ever been made against him for professional misconduct.

Chief Justice Smellie said that Wildman, not having satisfied the equivalency test, must, at best, be regarded as senior junior and, therefore, needs to meet the “exceptional circumstances” test. Wildman’s application did not satisfy that test, he said.

Wildman’s justification for admission on the basis of his experience in practising law in Jamaica was not regarded as exceptional.