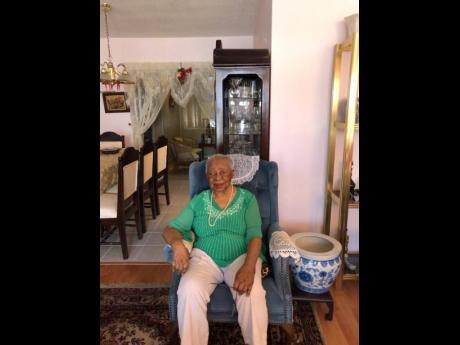 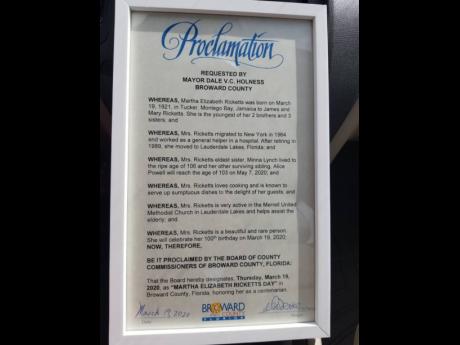 Ricketts, originally from Tucker district in Montego Bay, is the youngest daughter of James and Mary Ricketts. She is preceded by three brothers and three sisters. Her daughter, Stephanie Campbell, currently resides in Montego Bay. Ricketts, who is from a family known to be gifted with longevity, continues to enjoy good health. Her eldest sister, Minna Lynch, lived to the age of 106 and her other surviving sibling, Alice Powell, will reach the age of 104 on May 7.

In 1964, Ricketts migrated to the United States and between 1979 and 1989, she worked in New York City with Mary Newland, a writer for the prestigious Good Housekeeping Magazine. It was there that Ricketts honed her skills in fine dining, which complemented her well-known gift of hospitality. A year ago when Martha turned 100 years old, her house guests who arrived for the birthday celebrations praised her exotic meals of Spinach Florentine for breakfast; cheese puffs served with wine for dessert; poached pear appetisers; and dinner entrées of Cornish hen and breaded fish, sautéed and served in exquisite sauces. It was noted that Ricketts continues to cook with precise measurements.

In 1989, she retired to Lauderdale Lakes, Florida, and actively served at the Merrell Methodist Church, while assisting the elderly in her community.

Although Ricketts’ birthday celebrations were interrupted by COVID-19, and friends and family cancelled trips from Canada, Italy, Georgia, Panama, Germany and Florida, friends continued to send her their very best wishes.

To a person so beautiful and rare, a person with wisdom and integrity, though humble and noble, happy 101 birthday! We hope you enjoyed your special day and every day after. An outstanding person like you deserves only the best.