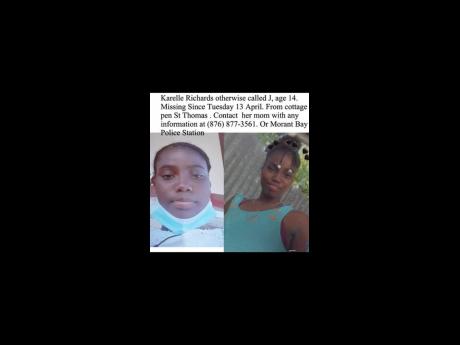 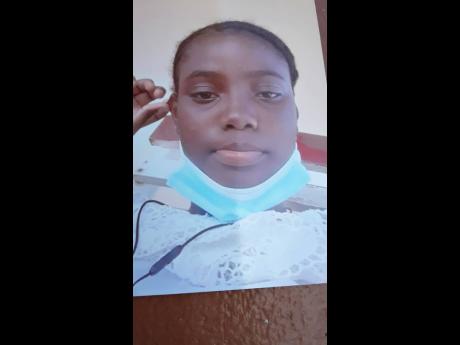 A 14-year-old girl, who is suspected to have ran away from her Cottage Pen home in St Thomas, has left her mother, Maria Bryan, in a state of anxiety.

The mother of three told The Gleaner that she has not been able to sleep or eat since Tuesday, April 13, when she first noticed that her youngest child and only daughter, Karelle Richards, was missing.

Bryan shared that as an attendant at the Princess Margaret Hospital, she often takes Karelle with her to work.

Tuesday morning was no different.

“When we both left the house to go to work, she was in a yellow T-shirt and jeans pants, but she left me there and went home.

“It seems she go change because somebody told me she was wearing a white top when they saw her in a taxi. It look like she leave and go change, pack up her things and left. Nobody took her away. She ran away,” said the distraught mother, who added that Karelle also took along with her a bottle of coins that she (Bryan) had been saving.

Bryan revealed that her 14-year-old daughter had been requesting revealing outfits, desires that she was reluctant to meet.

“She has been telling me that she wants her hair to be done, she wants nails to be done and telling me to buy some little skimpy, tight up things and I told her I’m not buying those for her to wear. I’m in church and I don’t deal with those skimpy things. I will buy jeans pants for her, but I won’t buy the tight up stuff to show up her physique. That is what she wants.

The saddened mother, who shared that she is not angry, appealed for her daughter to come home.

She told The Gleaner of fears that her daughter might have run away to be with a stranger she met on social media.

“I took away her phone in February after I answered a call on it from a man. When mi ask her who it was, she said she meet him on Instagram.

“Now I hear that she tell people that she is going to Clarendon because she find boyfriend on Instagram. I don’t know anyone from Clarendon.”

The St Thomas police confirmed that a report was made and that dialogue has been made with the Clarendon team. They say an alert for the missing teen has been put out.